Mangaluru, Feb 17: Hindu Jagaran Vedike (HJV) on Thursday February 17 demanded NIA investigation into all aspects related to the HIjab issue in order to lay bare what they claimed was a 'conspiracy' hatched by 'anti-national and divisive elements'.

Addressing a press meet here, HJV leader Kishore Kumar said, "Everyone is able to see that Popular Front of India (PFI) and Islamic organizations have sponsored the controversy over wearing of the Hijabs by the students that started from Udupi and became an internationally discussed issue. The right to religious freedom which was forgotten from the beginning of the academic year suddenly gained centrestage now. PFI and Campus Front of India (CFI) have a hand in these disturbances and the girls who created this ruckus are not innocent. 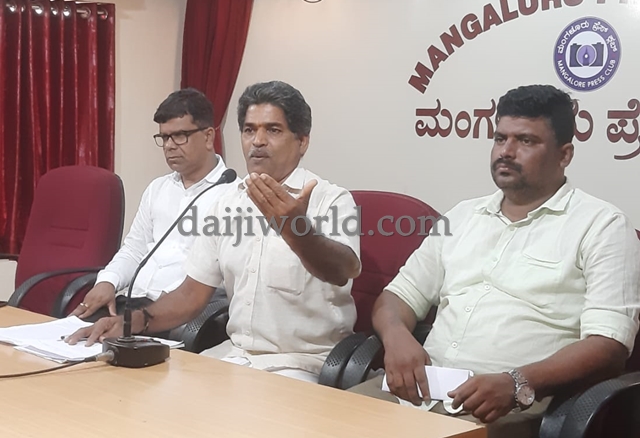 "The Twitter accounts of these girl students provide testimony to prove that they are in touch with CFI, which is the student wing of the PFI. In his tweet, a person named Vijay Patel has brought out the details about the role played by the CFI in spreading the Hijab controversy. If the students are questioned based on this, all the conspiracies behind the Hijab plan will be revealed," he said.

"At the same time, the fact that rowdy sheeters and PFI workers were caught with daggers when the Hijab controversy was hogging the limelight at Kundapur clearly denotes a larger conspiracy to start communal disturbances. Leader of HYC, the Telangana arm of PFI, visiting Kundapur and extending support to the protesting girl sltudents, discussions on this issue in the Gulf countries etc are conspiracies hatched by PFI as everyone can see. Therefore, the department has to undertake in-depth investigation into this issue," he urged.

Kumar further said, "KFD stands for Karnataka for destruction, CFI stands for criminal front of Islam, and PFI stands for poison front of Islam. These are criminal outfits and are trying to make the coastal belt another Kashmir. The students who protested say that they need Hijab but not education - this shows that they do not agree with the court's order."

He alleged, "Terrorist organisations have created this Hijab row. They are looking for ways to divide this country. At the beginning of the academic year the students did not show any importance to Hijab, but now all of sudden in December Hijab became important. This indicates that there is some kind of training behind it.

"Hindu Jagarana Vedike demands NIA probe into the Hijab row. There is need for probe to reveal who is behind this conspiracy," he added.

"Hijab controversy is an experimental plan of Islamization of India. It challenges the unity and integrity of the country and poses grave danger. Therefore it should be nipped in the bud without allowing it to grow further. It is the responsibility of the central and state governments. This is foul play by fundamentalist powers who dream of Islamizaiton. Such an environment had also been created during the CAA times. It is dangerous to say that they have the right to live as per the Shariat, Quran, Hadith etc and follow the guidelines given there. It clearly shows that Islamic fundamentalistm is getting sprouted here," the HJV said in a press statement.

"India should be governed as per its Constitution. Islamic state should not be allowed here in the name of religous freedom. They were given separate Islamic state in 1947. No further call for division should be entertained. They have to remember that India is not a Muslim country. They are behaving this way because of population explosion. Therefore population control measures should be enforced," the Vedike demanded. The Vedike also has demanded to implement uniform civil code.

"The entire country, breaking the shackles of party politics, should get united without giving importance to caste, creed, religion etc. Islamic plan has to be crushed and the deep-rooted conspracy should be rooted out. The lives of the Muslim women should not be allowed to be confined to dark corners under the hands of fanatic Muslim mullahs. In order for India to remain secular and democratic, we have to browbeat Islamic fundamentalism and this is the need of the current times," the Vedike opined in its sstatement.