Mangaluru, Jan 28: As readers are well aware of the horrific accident that took place at Kunigal last week which claimed the life of 28-year-old Joel Terence Fernandes from Kulshekar, his relative Rayan D'Costa was critically injured in the incident while the other three are out of danger.

The victims were returning to Bengaluru after a visit to their native, Mangaluru. The heart-breaking news had brought a pall of gloom on the entire district.

At present, Rayan is undergoing treatment at Sparsh Hospital, Yeshwantpur. He has already undergone a few major surgeries but has not yet come to consciousness. As per doctors, the other two major surgeries and specialized treatment may save him from death. The surgery itself may cost more than Rs five lac. The family members have already spent more than Rs 14 lac for Rayan's immediate treatment. 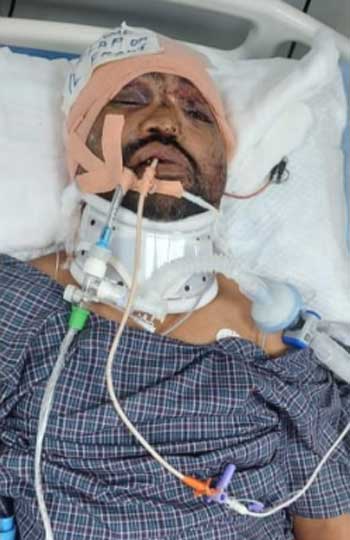 Rayan comes from a financially weak background and lives with his wife and two children. His wife is a homemaker and children are in school. The family does not have any other source of income and is not in a position to bear the expenses of the treatment as advised by the doctors.

The family members are now helpless and watching in dismay as Rayan's health is deteriorating with each passing day. They are now seeking financial help from willing donors to provide treatment. They hope that his treatment continues and he can lead a normal life again.

Those who wish to donate and help Rayan, may send their contributions to the following bank account details: