US Embassy greets Jaffrey, Nadella and Pichai for Padma awards

New Delhi, Jan 26 (IANS): The US Embassy in New Delhi on Wednesday greeted Microsoft Chairman and CEO Satya Nadella, Alphabet and Google's Sundar Pichai, and Madhur Jaffrey, unarguably the First Lady of Global Indian Cuisine, for being honoured with Padma Bhushan, the third highest civilian award in the country, which were announced on the eve of the 73rd Republic Day on Tuesday.

The trio, all settled in the US now, are among 17 persons who have been named for the prestigious Padma Bhushan award. 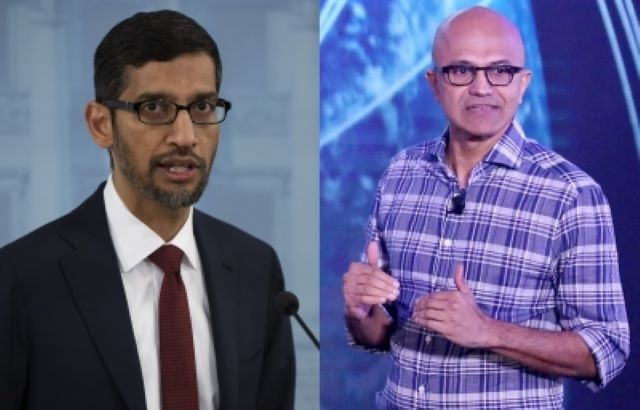 "Congratulations to @madhurjaffrey @satyanadella and @sundarpichai for being awarded the distinguished service Padma Bhushan award for their contributions in the culinary and technology sectors! A warm congrats to all #PadmaAward winners," the US Embassy tweeted on Wednesday.

Moving to the US, he earned an MS from Stanford University in materials science and engineering and further earned an MBA from the Wharton School of the University of Pennsylvania.

Pichai began his career as a materials engineer. After a short stint at the management consulting firm McKinsey & Co, he joined Google in 2004, and the rest is history.

Pichai was picked up as the next CEO of Google on August 10, 2015, after previously being appointed Product Chief by CEO Larry Page. He was appointed to the Alphabet Board of Directors in 2017.

Nadella studied at the Hyderabad Public School, Begumpet, before receiving a bachelor's in electrical engineering from the Manipal Institute of Technology in Karnataka in 1988.

He then moved to the US to study for an MS in computer science at the University of Wisconsin-Milwaukee, earning the degree in 1990.

Later, he received an MBA from the University of Chicago Booth School of Business in 1997.

He is currently the Executive Chairman and CEO of Microsoft, succeeding Steve Ballmer in 2014 as CEO and John W. Thompson in 2021 as Chairman.

Jaffrey is an acclaimed actress, food and travel writer, and television personality. She is recognised for bringing Indian cuisine to the western hemisphere with her debut cookbook, ‘An Invitation to Indian Cooking' (1973), which was inducted into the James Beard Foundation's Cookbook Hall of Fame in 2006.

She has written over a dozen cookbooks and appeared on several television programmes, the most notable of which was ‘Madhur Jaffrey's Indian Cookery', which premiered in the UK in 1982.