Managed by Karavali Cricket Academy, the St Aloysius Academy assures that the camp beginning February 1 at St Aloysius College Ground, Kodialbail will make people conquer as its focus is not only mere training but with its state of-the art facilities the trainee will be a resourceful cricketer. 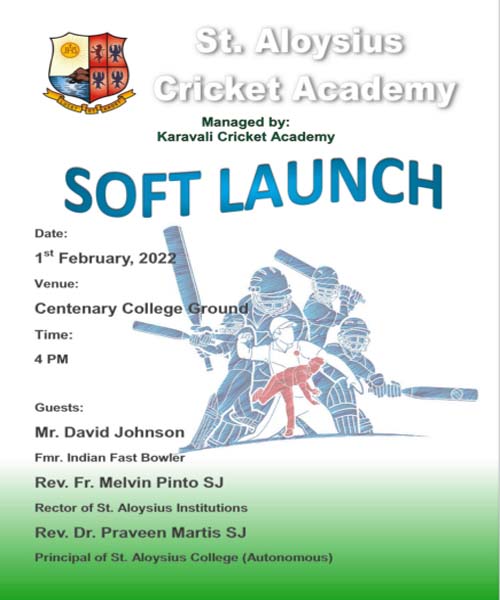 The students trained here will be ahead of others, right on the top. As a second-time venture in the State, turf wicket bowling machine will be in place. Other amenities at the camp are video analysis, sight screen, hand grass roller, batting tee, bowling nets, and container.

St Aloysius Cricket Academy is part of Karavali Cricket Academy, and we are one of the premier cricket coaching institutions based in southern India with headquarters at Mangaluru, Karnataka.

We are quite engaged in and committed to coaching and nurturing promising young cricketing talent of this region in particular.

Ever since its inception in 1996, Karavali Cricket Clinic has been conducting coaching camps/ tournaments /clinics in major cricket-playing towns and cities like Mangaluru, Udupi, Bengaluru, and Madikeri in Karnataka, Kasaragod, Tellicherry, and Ernakulam in Kerala State.

We have successfully conducted a series of coaching camps for the potential youngsters who were schooled and nurtured in these camps by some of the cricketing greats of our time namely, Ramakant Achrekar (Tendulkar's Coach), E. A. S. Prasanna, P. V. Shashikanth, and David Johnson among others.

Besides, we also have organised overseas cricket tours to Australia, Malaysia, UAE, England, South Africa, and Sri Lanka that gave a great opportunity for our players to gain international exposure and experience of playing in different conditions. Many of them eventually made it to the State side and have established themselves as the key members of the state team.

S Sreesanth, the bowling spearhead of Indian cricket team belongs to our Ernakulam Camp. Several boys have been selected for state teams (Karnataka and Kerala).

As of now the institution has trained more than 1000 young cricketers in its various camps spread across several regions of Karnataka and Kerala.