Panaji, Jan 22 (IANS): By fielding couples as candidates for the Valentines Day poll (February 14), the BJP may have just ended up emulating the Congress-Nationalist Congress partys disastrous 2012 election campaign, in which the ruling alliance at the time had fielded 10 candidates spread across four political families. 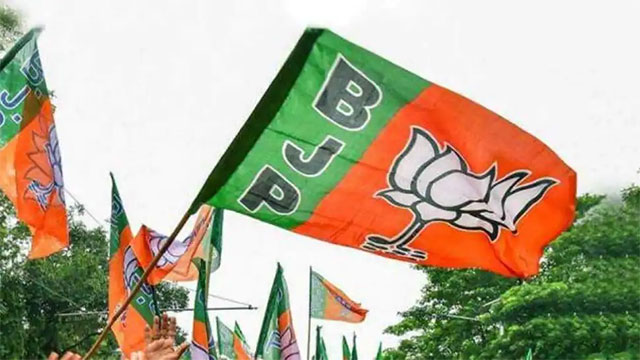 The popular reception of the candidature offered to the two couples has triggered comical memes on social media about the two couples testing their tryst with voters on Valentine's Day, when around 11.5 lakh eligible voters are scheduled to cast vortes.

The BJP's decision to pursue the 'family raj' way for the upcoming elections may do well to draw cautionary lessons from the campaign of an over-confident Congress-NCP alliance in 2012.

The Alemao family, led by the then powerful cabinet ministers Joaquim and Churchill were allotted tickets for the Cuncolim and Navelim constituencies in south Goa. Churchill's daughter Valanka contested from Benaulim, also in south Goa, while Joaquim's son Yuri was fielded by the alliance partner NCP from Sanguem.

Home Minister Ravi Naik contested from Ponda, while his son Ritesh was fielded from Marcaim.

Pratapsing Rane contested from Poriem while his son Vishwajeet Rane was fielded in Valpoi, both in north Goa.

The 10 'family' seats allotted by the Congress accounted for 25 per cent of the strength of the 40-member strong assembly.

Incidentally, the other 'family' which featured in the 2012 polls were the Dhavalikar brothers, Sudin and Deepak, the top two leaders of the Maharashtrawadi Gomantak Party which was in alliance with the BJP then.

The backlash against 'family raj', as well as other factors like the mining scam and allegations of corruption led to the Congress being reduced to single digits -- nine seats -- in the state assembly, while the BJP won an unprecedented simple majority in polls.

While the BJP has fielded two families for the 2022 polls, according to senior journalist Sagar Jawadekar, the BJP has tried to balance its candidate list by denying a ticket to the wife of its deputy Chief Minister Chandrakant Kavlekar.

"They have tried to balance this family raj quotient by denying Kavlekar's wife a ticket to contest from Sanguem," Jawadekar said.

The party may have also attempted to dull the 'family raj' sentiment by denying a ticket to former Chief Minister late Manohar Parrikar's son Utpal, who has now resigned from the BJP and pledged to contest the polls from Panaji, his father's bastion, as an independent candidate.

According to BJP's Goa election in-charge Devendra Fadnavis, 'family raj' is an occupational hazard one comes across in political life.

"We have to encounter occupational hazards in politics too. Babush Monserrate and his wife were elected and joined BJP. Jennifer Monserrate has her own identity and she is a minister in the BJP government," Fadnavis said, defending the party's decision to allot tickets to family members.

One of the earliest instances of dynastic tendencies in Goa politics, according to Jawadekar, began during the tenure of the state's first Chief Minister Dayanand Bandodkar in the early 70s. "While Bandodkar was against his daughter joining active politics, the members of his Maharashtrawadi Gomantak Party had lobbied hard to allot a ticket to his daughter Shashikala," Jawadekar said.

After Bandodkar's death, Shashikala went on to become the state's chief minister.