Bengaluru, Jan 21: Covid has been spreading rampantly all over the state during the last 10 days. In the past one week, over 10 annual fairs were held in various religious centres of the state. People overlooked the risks of flouting the Covid guidelines and crowded these centres. And the officials concerned  have become mute spectators to these open violations.

The recent order of the state chief secretary says that only routine pujas alone are permitted in the temples. It prohibits special events, religious meetings, processions and fairs. But during the last few days, annual festivals, processions etc., are going on in full swing with huge footfalls. 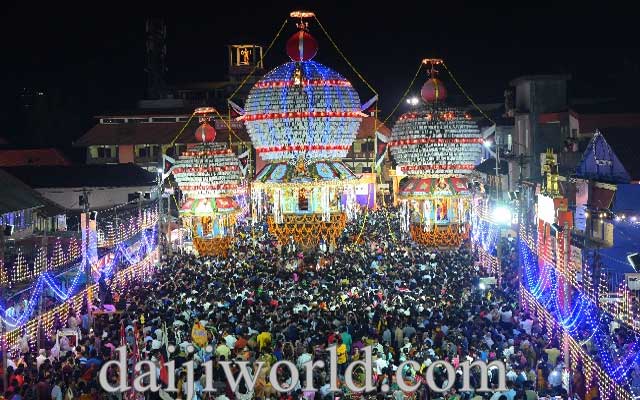 Even though entry of devotees is banned by the temple administrations during the annual festivals, people have been congregating inside the temples, which has worried the officials. For example, on Monday, about 50,000 people had gathered near Goddess Banashankari temple of Badami, Bagalkot district. The officials had permitted to hold traditional programmes with a limited number of people but during the car festival, a huge crowd had gathered.

The police had a hard time regulating people and sending them away. A similar scene was witnessed at Huligemma temple in Koppal where over a lac people had come together. Thousands also flocked Mailara temple in Hoovinahadagali taluk. Crowds at the car festival at Udupi, fair of Nanjanajgud Srikanteshwara temple etc also witnessed crowds which were much larger than what can be permitted under covid rules.

The officials of religious endowments department say that there are over a lac temples in Karnataka where fairs and car festivals are held between January and March every year and the department has no control over private temples. They said that it is up to the district level officials to act.

Even though the police and officials are trying their best, in many cases, legislators too attend the programmes. This trend may spell trouble as 47,754 new cases were reported from Karnataka on a single day yesterday.