Mangaluru, Jan 20: Most of the people are scared to death at the sight of snakes, and girls in particular always make it a point to keep away from snakes. There is a girl in the city who has rescued over a hundred poisonous snakes so far. Sharanya, a student who is pursuing her BSc degree course, has the courage and skill needed to handle and rescue poisonous snakes.

Sharanya Bhat, a resident of Ashoknagar here who is in her final year BSc degree at St Aloysius College here, has insatiable interest in snakes, frogs etc. Whenever she gets information about snakes having been sighted in the city or elsewhere, she rushes there, rescues the snake and releases it into the forest. She has tamed all sorts of snakes including common krait, python, rattlesnake, serpents etc so far. 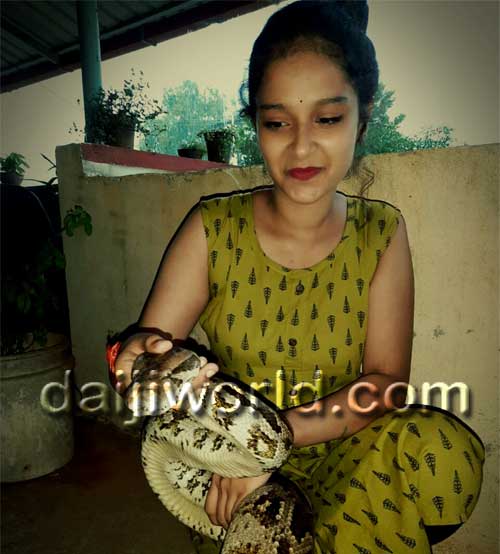 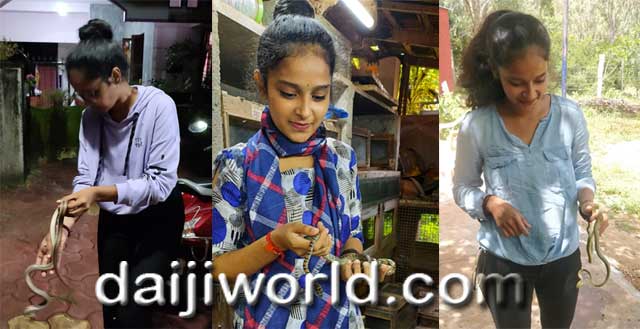 Her friends, who knew about her interest in snakes, had called Sharanya two years back about having sighted a common krait near Bejai. Sharanya went there and succeeded in meeting the first ever challenge in this sector. Sharanya has also been studying about the varieties of snakes and frogs. She was trained in the art and skills of catching poisonous snakes by Snake Joy, Ujire while Atul Pai, a snake expert from Ashoknagar here, has been supporting her interests. She is guided on the issue of species of frogs by Dr Vineeth Kumar Mangaluru while Dr Varad Giri is guiding her about snakes. She goes on trekking trips on holidays with environment lovers to hilly areas including Western Ghats to study nature and animals. She is a resource person in programmes held all over the state where information is given in different places in the state about animals and birds.

Even though she was born and brought up in a city, Sharanya visits the house of her grandparents in Kokkada whenever she gets time. From a young age, she used to roam around hills, fields etc and collect information about frogs and snakes. Her grandfather, Prakash Balthillaya, used to advise her against harming or killing animals. Sharanya says that this advice gave rise to love in her heart about animals, reptiles, and birds.

Sharanya reminds that like humans, animals and birds too have the right to live on earth and none of them are dangerous for the people. She says that the art of handling them should be learnt. She plans to get an MSc degree on wildlife conservation after which her interest is to join the forest department and serve the cause dear to her, of conserving nature, animals and birds.

Atul Pai from Mangaluru is appreciative of Sharanya's interest in conservation of wildlife and nature. He says she is quite courageous and the way in which she works and uses her skills she puts to work when catching the snakes are appreciable. He says he has been guiding her and she accompanies during his visits to rescue snakes. He says that Sharanya, who is studying about snakes and frogs even when being a degree student, richly deserves to be encouraged.

Title: Meet Sharanya from Mangaluru who rescues snakes to put them back in the wild