He was delivering a special lecture on 'India and Savarkar' on Thursday January 13 at the Rajangan of Sri Krishna Math. He revealed that before his demise, Savarkar had expressed the desire that upon his death, instead of 'veteran of the freedom struggle', the words, 'Hindu organizer Savarkar' board should be displayed behind his funeral pyre. Satyaki pointed out that the ideals of Hindutva and nationalism were that much deep-rooted in Savarkar's mind. 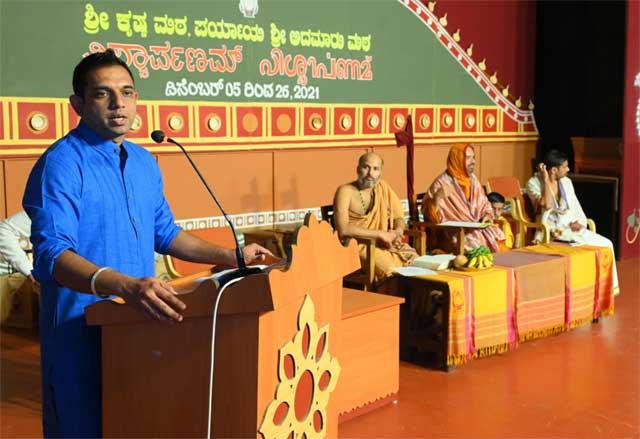 "Independent India has emerged as a result of sacrifices and renunciations made by revolutionaries and patriots. There is a need for Hindu mindset and nationalism to get embedded in all spheres. Through these things, the dream of Savarkar should be realized," he added.

Satyaki mentioned the fact that some people wonder what Savarkar did after spending years in jail. "If we study the life of Savarkar, we get the answer. He started 'Mitramela' organization in Nasik and prepared the youth to fight for the motherland by inspiring them with stories about the valiant acts of Chatrapati Shivaji. He trained them even in the use of arms to fight against the British," he narrated.

He said that even when he was undergoing inhuman mental and physical torture at the hands of the British when in the Andaman cellular jail, Savarkar had determined to rid India of the British colonial rule and was making advance preparations when inside the jail. He stated that Savarkar also brought the prisoners who were converted into Islam when in jail, back to Hinduism through a purification process. "The then Congress leaders failed to resist anti-Hindu stance owned after freedom. When Jinnah proposed division of India, the leaders nodded in agreement. They also did not oppose when it was decided to give one vote for Hindus against three to Muslims. But Savarkar vehemently followed Hindutva and nationalist ideologies," he said.

In his address, Sri Raghaveshwara Bharathi Theertha Swamiji of Ramachandrapur Math hailed Admaru Math for proving that the inner consciousness of the humans is far more superior to the machines. He said he is elated at the fact that during the Paryaya, Admaru Math Swamiji laid more emphasis on things made by the humans than machines, in an effort to lead the society back to traditions and natural style of living. He insisted that indigenously made ghee, oil, handloom products and other such naturally derived pure things should be given more importance by all the Maths. He assured that his Math will move ahead in this direction.

Sri Raghaveshwara said that the presence of a member of Savarkar clan on the stage has lent divinity to the programme. He hailed Savarkar as a noble revolutionary. He regretted the fact that India won freedom but there is dearth of self-esteem in the citizens. "We have to lay emphasis on individuality and implement our own principles and ideals. We have to keep Savarkar and other such leaders in our mind when marching on the path to serve the country and to stage a renaissance," he asserted.

Sri Ishapriya Theertha Swamiji of Admaru Math was on the dais.