Karkala: Family that lost 16 cows gets donations in form of cattle

Karkala, Jan 12: Sixteen cows on which the family of Yashoda Acharya from Miyyaru Kaje depended for a living were taken away by cattle thieves during a period of over a year. The family, which has become directionless, to its surprise, got some cows in the form of donations from minister V Sunil Kumar, Vishwa Hindu Parishad, and other organizations.

The only pregnant cow remaining in her cattle shed had been stolen by the cattle thieves late at night on Thursday. The family had lost about five lac rupees in the form of 16 cows. The minister donated a cow and a calf on his behalf and said words of encouragement. 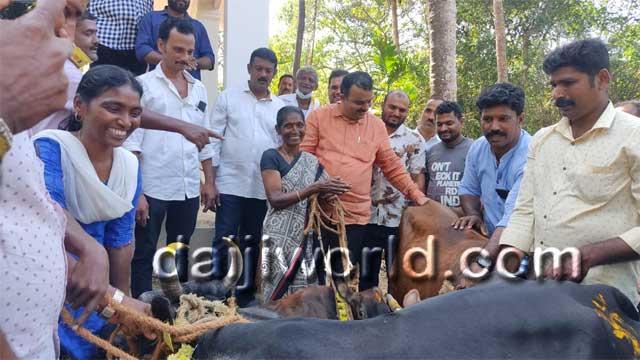 Similarly, 12 cows belonging to Sudhakar Shetty near Yashoda's house, were stolen by the thieves in a year. Five cows were stolen from the house of Rajesh Acharya living in Darkhas House, Lamina Cross, Nitte, on Monday.

Title: Karkala: Family that lost 16 cows gets donations in form of cattle