Mangaluru, Dec 25: The vacant site near the fourth mile in Bangrakulur ward has been used by the people for dumping whatever waste they have, for the last several years. It has now turned into a huge, unauthorized dumping yard.

There were several proposals like using this land as a cricket ground, construction of a bus stand etc. For the last three to four years, however, loads of construction waste, industrial waste, plastic etc are brought and emptied here. The heap is gaining in size with each passing day and it looks just like a dumping yard. 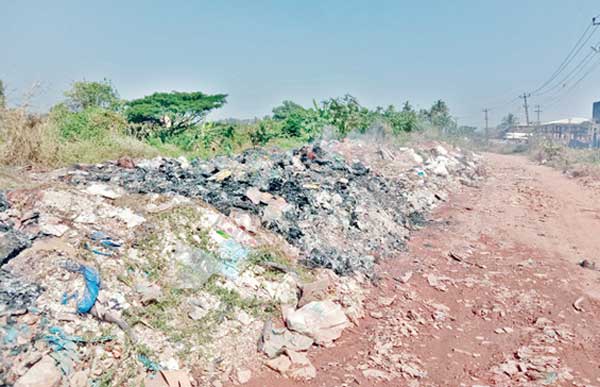 During each summer, this dump catches fire just like the landfill dump at Pachanady and it gives rise to thick smoke in the region. The locals say that those who visit the dump to pick rags and waste useful to them, start flames. As it is located adjacent to national highway 66, people travelling by vehicles also suffer due to this smoke and smell.

Three acres out of this land belongs to Mangalore Stock Exchange Ltd but its project has been shelved. When S M Krishna was the chief minister, he had laid the foundation stone for the stock exchange building construction. The remaining four acres of land has been given to the forest development corporation by the district administration in exchange for allowing the deputy commissioner's office to come up in the forest land belonging to the corporation at Padil.

None of the departments have attended to the garbage problem here. The high court has taken a serious view of the failure of Mangaluru City Corporation to handle solid waste and the dump created at Bangrakulur has become a headache for the corporation. The land has also become a site for immoral activities. The katcha road located by the side of the site leads to Gurpur river in Bangrakulur. This is a desolate place which people seldom visit. At night, people come here, have liquor and engage in other activities, it is said. Unethical activities involving transgenders too reportedly keep happening on this site.

City corporation commissioner Akshy Sridhar, said that it has been decided to conduct a survey of the land and level it. He said that the matter has been discussed with the deputy commissioner and steps will be taken in this direction soon.