Mangaluru, Oct 25: Street dogs have become a nuisance in Ullal and surrounding areas. A man who saw that a dog with wounds all over its body was biting other dogs near MUDA site between Someshwar and Ullal, had complained to the municipality, duly expressing worry about the possibility of the spread of rabies in the region.

The number of street dogs is multiplying in Ullal, Someshwara, Kotekar and other places. Sterilization camp for dogs has been conducted only by Someshwar town municipality and nowhere else, the people say. 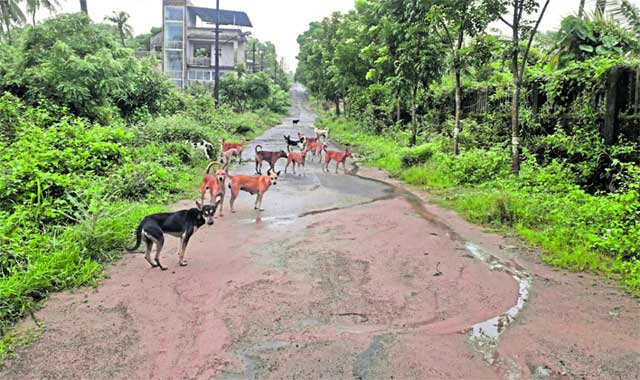 The people who saw that a dog full of wounds was biting other dogs, had hit it with a stick and informed Animal Care Trust, Shaktinagar. By the time the trust people came the dog had died. Therefore, the health of the dog could not be checked and the municipal commissioner was approached with a complaint, it is learnt. Mangalore Riaz, convener of Parisara Samrakshana Nagarikara Okkoota, asked the municipal commissioner through his written complaint that dogs with rabies virus in their bodies have been found in Ullal and Someshwara limits. He sought immediate action as the people are now worried also about the domestic dogs.

Trustee of Animal Care Trust, Suma R Nayak, said that dogs with symptoms of rabies are bought and kept for ten days in isolation wards. "If the dog dies within ten days, the viscera of the dog's brain is sent for viral testing. The Dog Rules are not followed in rural areas and local bodies are not setting aside grants for the street dog population control," she observed. She says that because of the increasing number of dogs, it would be hard to control if rabies begins to spread.

Dr Nagaraj, animal husbandry department official in Ullal, said that his department does not have any plans or schemes about canine control of street dogs. He opined that social service organizations and local administrations can join hands to hold rabies camps. Such camps also create awareness among the people, he stated.