Haveri: Congress has pushed minorities into well, lifts them up when elections near, says CM

Haveri, Oct 24: Chief minister Basavaraj Bommai on Saturday October 23 hit out at the opposition Congress and said that the party had pushed minorities into the well and remembers them only when elections approach.

"Congress, which remembers minorities when elections are round the corner, will lose its base if they forsake it," said chief minister Bommai.

The chief minister further said, "Congress has pushed minorities into the well, and lifts them up with the help of a rope only when elections arrive. After the voting is over it puts them back into the well. Even then it says that they are the saviors and protectors of minorities. In reality, it is the minorities who are protecting Congress from getting extinct. 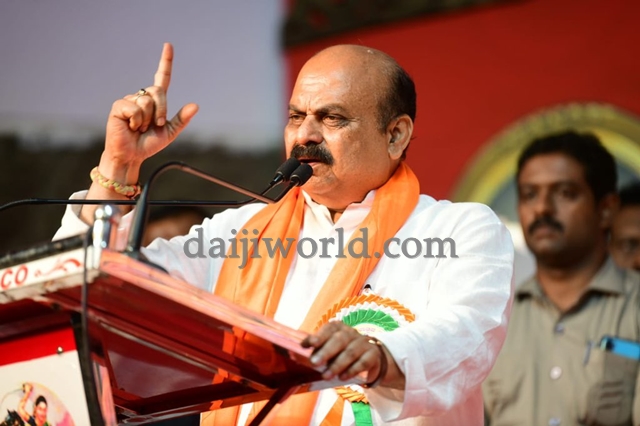 "When Congress was in power they did not pay attention to irrigation projects, farmers and north Karnataka region of the state. It is not a sinking party, it has already sunk. If we see the map, Congress' presence remains to a little extent in Karnataka only. If BJP candidates win the by-elections, Congress will get extinct in our state also," he said.

"I will not get distracted by the criticism of opposition parties. I will develop the state comprehensively. My attention is towards people of all classes and comprehensive development of the state," he assured.

Chief minister Bommai said, "Even after the re-division of states, names like Hyderbad-Karnataka and Mumbai-Karnataka are continuing. These parts of the state will be renamed as Kitturu-Karnataka as per the demand of the public. An announcement in this regard will be made in the coming cabinet meeting."

Bommai was speaking after flagging off the Kittur Utsava silver jubilee celebration at the campus of Kittur Chennamma Fort in the city.

Bommai further said, "Veerarani Chennamma, who is a symbol of patriotism, sacrifice and self-respect, had sent shivers down the spines of the British. Government will take action very soon to announce this celebration commemorating the victory of Rani Chennamma as a state festival.

“When I was the district in-charge minister of Belagavi earlier, I got the torch of Kittur make rounds all through the state. The following governments stopped the ritual. From next year, I will order for the torch to be relayed throughout the state a month before the celebration of the festival," the CM said.

Title: Haveri: Congress has pushed minorities into well, lifts them up when elections near, says CM