KJo knows how to take a joke on himself

Mumbai, Oct 23 (IANS): Director Karan Johar is known for many things: films, hosting 'Koffee With Karan' and of course his Dharma Productions. The man dabbles many things but it's the first time he will be seen venturing into the tricky waters of stand - up comedy with the second season of Prime Video's 'One Mic Stand'.

Talking about the same, Karan says: "You know I'm always a sport when it comes to taking a joke and I finally got the opportunity to do that myself. I wanted to take up this challenge because I have been in front of the camera several times but this show is not even remotely close to what I have done in the past. 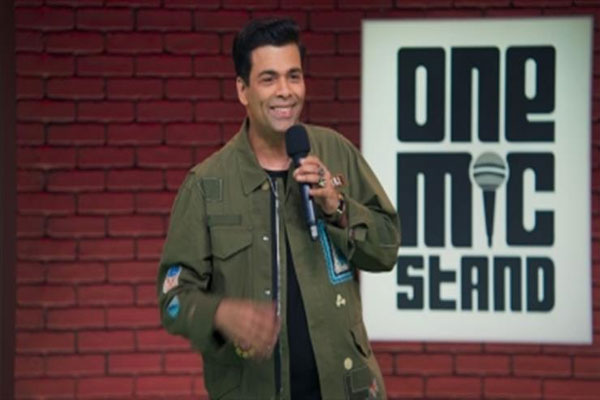 "I was especially attracted to the format of the show, which is perfect because I got a chance to connect with the audience more candidly."

The act of finding humour in simple things and packaging them into punchlines is what makes comedy a thrilling artform.

Karan excitedly talks about his gig in the show, he says: "Comedy is one of the most loved genres on streaming sites so naturally when I got a call to do One Mic Stand 2 I had to say yes."

Commenting on the show's central idea, the Dharma head honcho says: "I think it's beautiful to get artists from completely different worlds and immerse themselves in comedy while collaborating with a pro comic that shares the same like mindedness and individuality. This is what resonates with the audiences making this show a complete hit."

Karan also appreciated his mentor on the show, Sumukhi Suresh, as he says: "Sumukhi was such a blast to work with, her humor is always so well timed. She understood my voice and guided me in writing a set that fit me like a glove, working with strong female voices is always enthralling, we connected on our common love for creating content."

The filmmaker-entrepreneur also spoke about the craze of stand-up comedy, all over the nation.

Concluding his thoughts on the same, he says: "Stand up comedy has been on the rise in India in English and regional languages, this show moves in the right direction to accelerate this upcoming form of entertainment in India and hopefully inspire a lot of aspiring comics and open doors for them."

Created and conceptualised by Sapan Verma of the comedy collective EIC, 'One Mic Stands' brings together celebrities from various backgrounds and subjects them to a live audience to find if the celebrities can leave the audience in splits with their jokes, style of humour and performances.

The makers of the show released the trailer last Friday and revealed the exclusive look of the celebrities who will be seen getting on to the other side of the mic and testing their skills in the art of inciting humour.

Title: KJo knows how to take a joke on himself