Puttur, Oct 22: The coordination committee of Dalit organisations held a mega protest meeting opposite rural plolice station here on Thursday October 21, urging the police to arrest the actual accused in the case relating to the rape of a minor Dalit girl in Badagannur village here.

The protestors went in a procession on foot from Darbe circle to the rural police station before initiating a protest demonstration there. They also raised slogans against the rapist they say was involved but is being shielded. 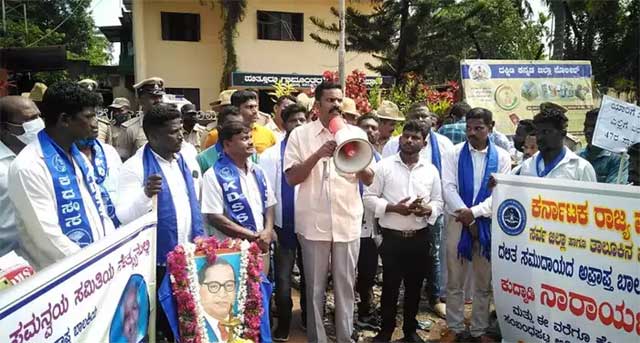 State president of Mugera Sangha, Vishwanath Bengaluru, pointed out that it has already been one and half months since the incident happened, but the girl who faced injustice has not yet got justice. He said that the police department has not yet registered a case against the actual person responsible for the crime. He said that the police have arrested the elder brother of the girl by twisting her statement. He said that politicians are working in support of the criminal.

Mugera Sangha state president, Vishwanath, warned that a strong agitation at the state level will be launched if the actual culprit is not arrested in the case. He accused the police department and medical officer of hiding the truth in the case pertaining to the rape of Dalit minor girl. Addressing a press conference, he said that the brother of the girl has been wrongly projected as the accused as the real accused is a RSS activist and BJP leader. He demanded for the immediate arrest of the accused and the initiation of legal action against him if the BJP and RSS have real concern for the people.

Anand Mittabail warned that if the accused is not arrested within a week, a protest will be held in front of the office of the deputy superintendent of police.