Hubballi, Oct 21 (IANS): The Karnataka Police have filed FIR against Bajrang Dal leader and 100 activists of Hindu outfits for allegedly abusing an IPS officer on duty while staging protest against religious conversions in Hubballi, police sources said on Thursday.

The police have booked Bajrang Dal leader Ashok Anvekar and others on charges of abusing K. Ramarajan, Deputy Commissioner of Police (Law and Order) while protesting on October 17. Ramarajan has filed a complaint in this regard along with other police officers.

Anvekar and others had organised a protest before the police station demanding the arrest of persons involved in religious conversions. The agitators demanded the resignation of Ramarajan and called him a traitor. They also shouted slogans that the officer will bring disrepute to the police department. 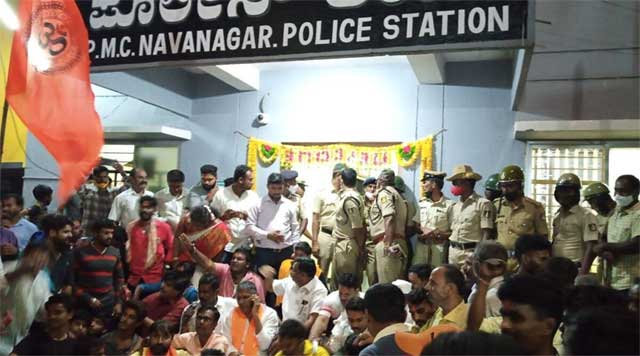 The agitators threatened that, if Ramarajan is not transferred, they would lay seize to the Police Commissioner's office. They also chided Ramarajan that he was supporting those involved in religious conversions.

The video of agitators calling Ramarajan names and raising slogans against him has also gone viral on social media platforms.

Police sources said the protest was organised without permission from the police. The agitators chided the police that they can only fine vehicle riders for petty traffic violations and do not have guts to take action on religious conversions. Further investigation is on.