Mangaluru, Oct 16: Locals have alleged that fish oil manufacturing units located in Kotepura have been causing the pollution of the river and sea.

After the breakwater was installed in Ullal and Bengre regions, Ullal began to suffer from sea erosion, they said. "Later, in1991, the lime burning units, godowns used for drying fish and fish oil manufacturing factories, which functioned in Kotepura area, were vacated. The area was later identified as CRZ-1. Still, the lime manufacturing units and dry fish godowns turned into fish oil manufacturing units. After 14 fish oil factories began work here, the area started suffering from high levels of pollution, and 200 to 300 houses in Kotepura faced problems," they explained. 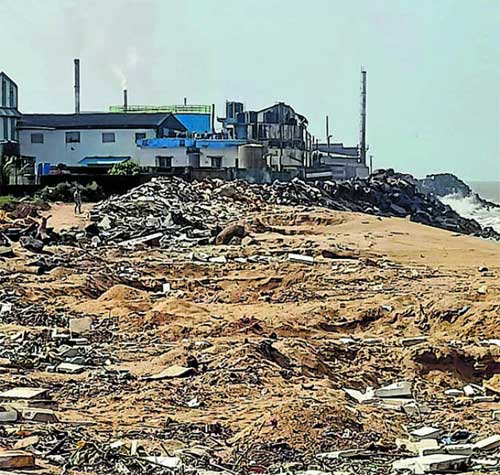 Ismail Podimonu, a social worker, had filed a complaint about this aspect in the court of the sub divisional officer. The owners of fish oil units expressed their willingness in the presence of the environment pollution control board officer to establish an environmental treatment plant and set up one such plant for 14 factories, at a cost of about Rs 40 lac. After this unit was established the pollution getting into the sea and river had reduced, but now again the waste materials from the factories are joining the sea, the local people complained.

The people of Kotepura say that as per the agreement in the court of the sub divisional officer, the factories had agreed to plant eucalyptus trees but this condition has not been complied with. The factories were to install a regulating machine which the pollution control officials were to inspect every month and obtain a report. This also is not being done. The express power line connection given to factories may invite danger anytime, they said.

Santosh, a fisherman from Mogaveerapatna, says that the vehicle drivers who take fish to the factories, throw water on the way due to which terrible stench envelopes the entire area always. Even after a complaint was made to the police department, the stinking water continues to be poured as before, he added.

Over 500 workers both local and others are working in these 14 factories. Boilers are located very near the furnaces which is dangerous. Safety steps should be taken and security should be provided to workers, the workers have been demanding.

People's Union for Civil Liberties activist, Kabir Ullal, had approached the National Green Tribunal's Chennai bench about the said environment pollution. The tribunal, which took up the case, passed an order in 2016 to close down the factories as they fall under CRZ rules and the reports given have proved about pollution. But the owners of the factories have challenged the order in the Supreme Court, where the verdict is pending.

HK Khader, president of Fish Oil Mill Association, speaking to Daijiworld said, "Usually, fish smell emanates while the vehicles transport the fish to the fish oil plants. It is not because of the production in the plants. After the pollution board asked to install bio-filters, there is no issue of smell during the production.

“The people who complain will keep on complaining. It will never end. Those people are personally targeting us. There is a pollution control board department, which will look after these issues. All these issues will be monitored by the state and central pollution board through the online system. If there is any issue, they will alert us. There is no fish smell during production in any plant.

“Earlier, wastewater was let into the sea after treating it. But, now we are manufacturing by-products out of wastewater. The water we discharge is condensed one. Now, the production of fish oil has become a competitive business. If one does not use the wastewater for by-products, he has to suffer loss of lacs of rupees in the business. Earlier, this business was limited to Mangaluru and Udupi. Now, several plants have flourished in Tamil Nadu. They have bagged the top position in production. Seven plants have come up in Kerala as well. There are nearly 14 plants in Maharashtra also,” he said.