Mangaluru, Oct 12: There have been allegations that the BJP leaders have been backing the moral policing incidents in the light of the upcoming election. In an incident which seems to support this assumption, photographs of the BJP MLA Umanath Kotian, escorting two persons named as accused in moral policing case, out of the police station have become viral.

The MLA is seen in the photos taking with him Samhitraj and Sandeep Poojary, the two arrested accused, who were released on interim bail. 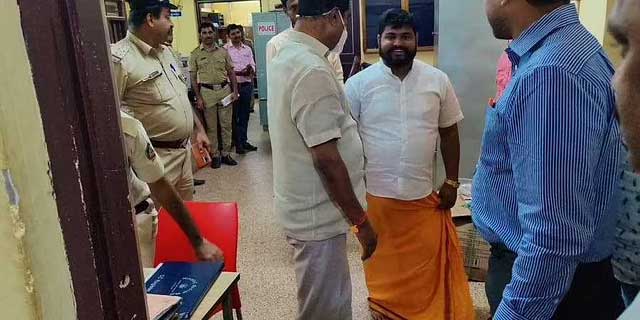 The above two had been arrested on Saturday connection with a case in which a gang of six to eight activists belonging to Hindu organizations had intercepted a car in which three women and a man were travelling to Kerkala at Moodbidri and harassing the passengers in the car.

It is said that a Muslim couple along with two Hindu women were travelling together in the car. On the basis of a complaint now filed by one of the affected people, Moodbidri police had arrested both of them, and booked them under different sections of the Indian Penal Code.

The two succeeded in securing interim bail the same night after the police produced the two before the magistrate through the video conferencing facility. The Congress party, in the meanwhile, tweeted the photos, and questioned the BJP MLA about supporting the accused. It recollected that the chief minister Basavaraj Bommai, after such incidents happened in Bengaluru, had stated that cases of moral policing would not be tolerated and wanted the chief minister to respond to the MLA's behaviour in this incident.