Ratnagiri (Maharashtra), Sep 2 (IANS): For the first time in India, the tusk of a rare Atlantic walrus was seized, from a coastal village in Maharashtra's Ratnagiri district, officials said on Thursday.

Following a confidential tip-off on Auguts 31, Forest Department teams from Ratnagiri and Satara, along with the CI) laid a trap and nabbed three accused red-handed with the booty from Hatkhamba village.

"The three arrested are from Goa and Maharashtra. We have recovered the tusk, approximately 15-16 inches long, of an Atlantic walrus (Odobenus Rosmarus)," Honorary. Wildlife Warden Rohan Bhate, who is also Member of the Wildlife Crime Control Bureau (WCCB), told IANS. 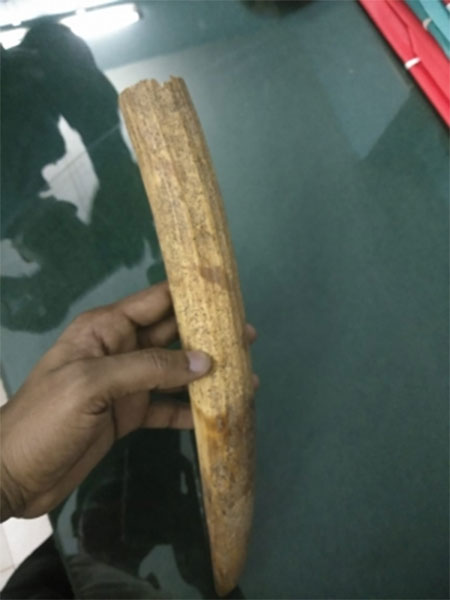 Teams of wildlife sleuths have been formed to conduct a nationwide operation to track the gang behind the Atlantic walrus ivory tusk smuggling, their associates, the buyers, etc.

Ratnagiri Range Forest Officer Priyanka Lagad said that this is the first-ever such seizure of a walrus tusk since these marine animals are found only in the icy shores of northern hemisphere, around 10,000 kms from here.

"The challenge before the investigations is to find how the tusk has reached Maharashtra, who are the other players, how big is the racket and what are its larger ramifications," she said.

However, Lagad declined to reveal the exact quantity/weight of the large tusk, its market value and other details owing to operational reasons and to avoid alerting the others who could be involved in the crime.

Bhate said that following the interrogation of the accused trio, the teams will go to other Indian states and are likely to effect more seizures of wild creatures or their valuable organs.

As far as the atlantic walrus tusk's valuation, most experts and wildlifers term it as "invaluable" and beyond comparison with the elephant tusks that are the favourite of ivory smugglers globally.

The accused smugglers nabbed were identified as M. Numan Yasin Naik, 42, of Permem, Goa, Hemant Suresh Kander, 38 of Kankavali and Rajan Dayal Pange, 58 of Malvan, both in Maharashtra's Sindhudurg district.

The team has also seized a car in which the tusk was being transported to an unknown location for a sale, and all the accused have been charged under the Section 49(c), of the Wildlife Protection Act, 1972 and CITES.

Bhate said that the laws are so stringent that besides the smugglers, any dealers in such ivory brought into the country illegally, manufacturers or buyers can be booked.

Walrus is a huge flippered, deep-diving marine mammal, weighing over two tonnes, with the tusk measuring upto one metre long, and is found only in the Arctic Ocean, the Pacific and Atlantic oceans, around the North Pole, and the sub-Arctic seas in the Northern Hemisphere.

Massive hunting had depleted the walrus populations massively in the last century but their numbers are gradually increasing with protection measures by several countries in the far north.