Dubai, Mar 7: Kannada film ‘Bell Bottom’ is all set to release across UAE, Oman, Bahrain and Qatar on March 7 to 13.

Bell Bottom, since its release in Karnataka on Feb 15, has been receiving very good reviews from media and audience.

Bell Bottom is directed by Jayatheertha and written by Dayanand T K. The film is produced by Santhosh Kumar K C under the Golden Horse Cinema banner. The film features Rishab Shetty and Hariprriya in the lead roles. The supporting cast includes Achyuth Kumar, Yogaraj Bhat and Pramod Shetty. 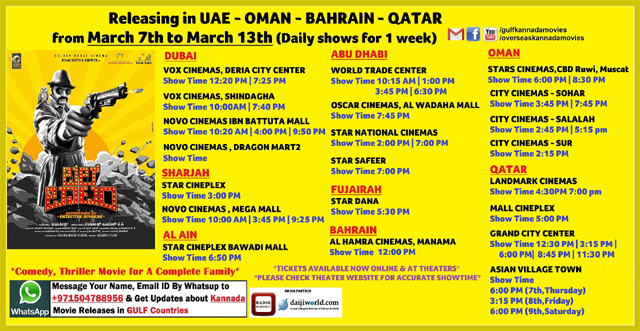 Bell Bottom is one of the finer films to have hit the screens lately. The film is entertaining, but what is more commendable is that it has those little nuances that ensure the imagery to the time that the film is set in remain intact. Bell Bottom is worth that weekend trip to the cinema halls for its laughs and clever writing.