Mangaluru, Feb 19: Power Star of Sandalwood, Puneeth Rajkumar, confessed that he can never forget the taste of Mangalurian fish and the way the people here treat him.

He was speaking after visiting Suchitra Theatre where his 'Nata Sarvabhauma' movie is being screened, on Sunday February 17. Puneeth is in the district in connection with the shooting of a film.

Puneeth said that he has visited the city, Udupi, Manpal, Mulky, Dharmasthala etc often. "I have enough friends and fans here. I have also visited the district for shooting along with my father. Films like 'Apoorva Sangama' and 'Ondu Muttina Kathe' were entirely shot in the coast. I also accompanied my brothers when their films were shot here in the past," he recollected. 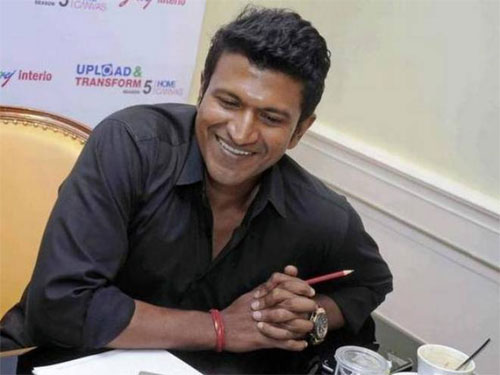 When the people gleefully cheered him, Puneeth requested them to support Kannada stars by watching Kannada movies. He stressed that one should always support his own village, state, language and country. Noting that more and more Tulu films are being made now-a-days,he said he knows some words in Tulu. He hoped that Tulu movies would be watched by audiences elsewhere in the state too.

During his visit to the theatre he shared his joy with the audiences who were watching his movie.