Karkala, Dec 10: In a tragic accident that occurred near Nellikaru on Karkala-Subramanya state highway a one and a half year old child and parents lost their lives as the car in which they were travelling was hit by a private bus.

Srikant (40), native of Anantapura of Andhra Pradesh, presently working in a software company at Nelamangala in Bengaluru, his wife Pratyusha (32) and their daughter Gamya (1.5) are the unfortunate victims of this tragedy. 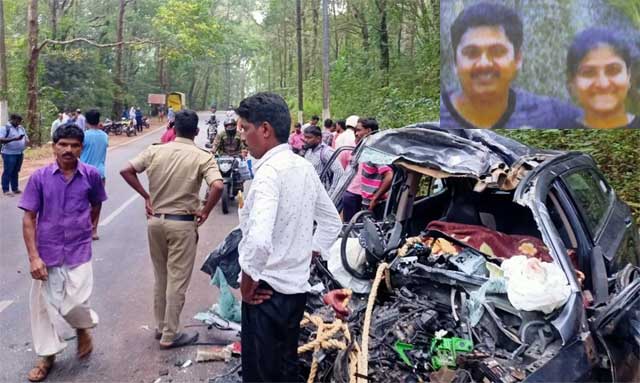 The family was moving to Sringeri after visiting Dharmasthala in their car when private bus going from Karkala to Beltangady collided with their car at around 7.15 am. All three died on the spot due to the impact of the collision.

Bus was moving at a slow pace. The car was driven at a high speed. The road did not have steep bend. The bus driver who noticed the speeding car tried to evade from collision and took the bus to further left but as trees were on the roadside, he could not go further left. Meanwhile, the speeding car collided head on with the bus. While the car was completely mangled, bus also received damages. The bus passengers escaped with minor injuries.

Srikant was driving the car and his wife Pratyusha was sitting beside him. The child was with the mother. Both the airbags were in opened condition. Srikant and wife died in sitting position, while the child was thrown to the back seat and died. Locals rush to the spot hearing the deafening sound like explosion. Locals and bus passengers removed all three victims from the car with great difficulty.

Police had tough time reaching the relatives of the deceased. They took the fingerprints on the mobile in the car and tracked the address of relatives. The mortal remains were kept in the ambulance for more than three and half hours by police waiting for their senior officers to arrive. Locals expressed anguish on this delay. Locals informed minister V Sunil Kumar and senior officers of police arrived on the spot immediately and the bodies were taken to Moodbidri hospital for post mortem.