New Delhi/Shimla, Dec 8 (IANS): The BJP on Thursday recorded a historic win Gujarat by winning 156 seats while Congress got an absolute majority in the Himachal Pradesh Assembly elections winning 40 seats - six over than the half-way mark of 34 in the 68-member House, while the outgoing BJP was reduced to 25.  In Gujarat, Congress could win only 17 seats, while AAP opened its account with 5 seats while the Samajwadi Party and the independents had to be content with 3 and 1 seats respectively.

After the record win in the Gujarat Assembly election on Wednesday, December 8, Prime minister Narendra Modi thanked Gujarat and said the people of Gujarat blessed the politics of development.

The Bharatiya Janata Party has created history by coming to power for the seventh consecutive time with a thumping majority in Gujarat. After the results were announced party workers could be seen dancing and singing in large numbers at the BJP headquarters in Gandhinagar and Delhi.

Prime minister Narendra Modi took to Twitter to thank the people of Gujarat. He tweeted, "To all hardworking @BJP4Gujarat Karyakartas I want to say - each of you is a champion! This historic win would never be possible without the exceptional hard work of our Karyakartas, who are the real strength of our Party".

"Thank you Gujarat. I am overcome with a lot of emotions seeing the phenomenal election results. People blessed politics of development and at the same time expressed a desire that they want this momentum to continue at a greater pace. I bow to Gujarat's Jan Shakti", expressed Modi on Twitter.

The BJP overcame anti-incumbency yet again after being in power for 27 years without losing an election since 1995. It had 99 seats in the outgoing House with a 49.1 per cent vote share, which are now set to cross 150.

Acknowledging the adverse mandate, outgoing Chief Minister Jai Ram Thakur, under whose leadership the BJP went into the polls, told the media here: "I respect the people's mandate and I want to thank Prime minister Narendra Modi and other Central leadership during last five years. We will stand for the development of the state irrespective of politics. We will also analyse our shortcomings and improve during the next term."

Thakur, who was banking on Prime minister Narendra Modi's charisma, submitted his resignation to the Governor, who accepted it.

Himachal Pradesh has not voted any incumbent government back to power since 1985.

Six-time Congress MLA Asha Kumari lost her stronghold Dalhousie from her nearest rival and BJP candidate D.S. Thakur by a margin of 9,918 votes. Asha Kumari was among the Chief Ministerial probables.

In the 2017 assembly elections, the BJP had won 44 seats and the Congress 21, with one seat going to CPI-M, and two to Independent candidates.

Responding to the poll outcome, Prime Minister Narendra Modi tweeted: "I thank the people of Himachal Pradesh for the affection and support for the BJP. We will keep working to fulfil the aspirations of the state and raise people's issues in the times to come."

Congress leader Rahul Gandhi, who didn't campaign in the state, thanked the voters for the Congress' win.

"Heartfelt thanks to the people of Himachal Pradesh for this decisive victory. Hearty congratulations to all Congress workers and leaders. Your hard work and dedication really deserves the best wishes for this victory. I assure you again, every promise made to the public will be fulfilled at the earliest," he said.

Considering the family legacy and contribution, Congress state unit chief Pratibha Singh had sought votes in the assembly polls on development carried out by her husband Virbhadra Singh during his six terms as the Chief Minister.

Pratibha Singh, who has not contested the Assembly polls, has been projected as the prospective Chief Minister too.

Coming out openly after retaining his Shimla (Rural) seat for the second consecutive term, Vikramaditya Singh said: "We will form a government with a full majority... She (Pratibha Singh) is one of the contenders for the CM post."

Pratibha Singh, who won the Mandi seat in the 2021 Lok Sabha bypoll, missed no opportunity to remind the electorate that the victory in assembly election "will be a tribute to him (Virbhadra Singh)."

"Not only the Congress supporters but also from other parties voted for us as a tribute for Virbhadra Singh," she said.

Mincing no words, Pratibha Singh told the media after the party's straight win that the family of Virbhadra Singh has played an important role in this election and considering the contribution of Virbhadra Singh for the state, then party President Sonia Gandhi appointed her the state president.

Well ahead of the Assembly polls, the Congress had appointed the three-time MP as the state unit president.

Pratibha Singh had spearheaded the poll campaign on the legacy of Virbhadra Singh, never missing an opportunity to remind voters for development and work initiated by her late husband.

She banked on the party's promise to bring back the Old Pension Scheme (OPS) that will benefit 225,000 employees, a crucial vote bank.

Reposing faith in the party legislators, Pratibha Singh told the media: "People have given us the mandate. We can meet (our MLAs) anywhere, including Chandigarh or in the state. Those who have won will be with us and we will form the government."

New Delhi, Dec 8: The counting of votes for the Gujarat and Himachal Pradesh Assembly elections which were held earlier, will be held on December 8.

The counting of votes will start at 8 am.

While the contest in Gujarat has traditionally been between the BJP and Congress, it was three-cornered this time around with Aam Aadmi Party (AAP) entering the poll arena. 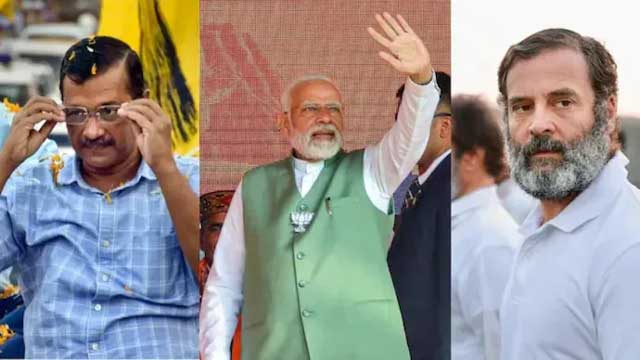 Exit polls have predicted a big majority for the BJP in Gujarat and if these projections are any indication, the saffron party is all set to retain power in the state for the seventh consecutive term. The emergence of the AAP as the third major political force in the state has intensified the electoral battle in Himachal Pradesh this time.

In Himachal Pradesh, the exit polls projected a range of 24-41 seats for the BJP and 20-40 seats for the Congress. The majority mark is 35 seats.