Mangaluru, Nov 28: With few days remaining for the merger of Surathkal tollgate with Hejamady happening on November 30, huge banners thanking and congratulating the BJP MLAs and MPs have literally reached a cemetery.

Several banners have been found in the cemetery in the heart of Surathkal which read, "Hearty congratulations to honourable Mnagaluru Nalin Kumar Kateel and local MLA Bharath Y Shetty who fulfilled their promise of removing the Surathkal tollgate."

Now with the possibility of these banners drawing the ire of the public and a strong opinion doing the rounds that BJP had no role in the vacating of the Surathkal toll gate, it is said that the banners have been hidden in the cemetery. 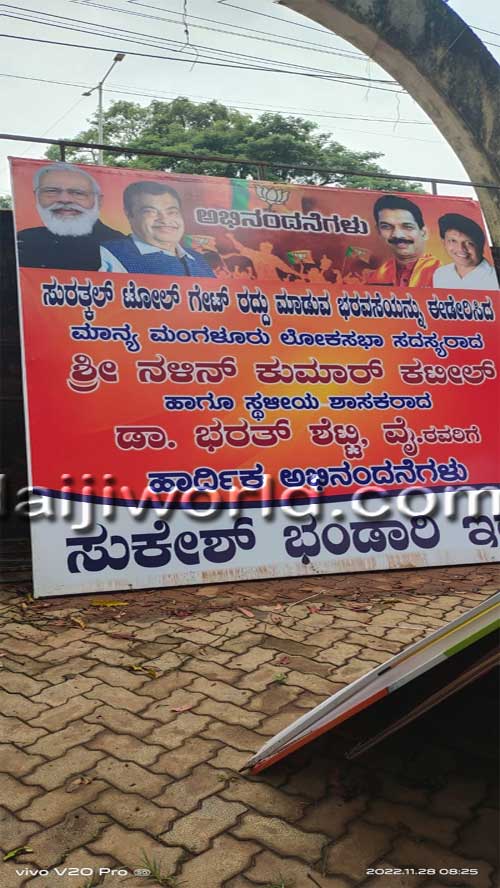 Reacting on the scenario, toll gate struggle committee convenor Muneer Katipall said, "The toll gate was not vacated because of these inefficient MP and MLA. It is the fruit of the relentless protests by the tollgate struggle committee and like minded associations. BJP was out to claim undue credit for the removal of Surathkal toll. However, following dissent within the party itself regarding this move, the banners have been hidden in the Surathkal cemetery. If these publicity hungry MPs and MLAs had really worked in favour of the people, we would not have been looted illegally in the name of toll for the past seven years. This itself shows how weak BJP is." .

No toll charges at Surathkal from Dec 1, state govt to bear expenses in case of disruption at Hejamady

Deputy Commissioner of Dakshina Kannada district M R Ravi Kumar has, in an order dated November 24, 2022 said that toll charges will not be collected at Surathkal toll gate from December 1.
Already, there has been an order passed to collect additional toll charges at Hejamady toll gate due to the merger of the two toll gates. However, strangely, the DC's latest order issued on November 24 was released on Monday, November 27.