Kalaburagi: With no ministerial post, Eshwarappa lashes against own party

Kalaburagi, Oct 4: Former minister K S Eshwarappa vented out against his own party leaders for not taking him back into the cabinet even after he was cleared of the accusation of abetting suicide of Belagavi based government contractor Santhosh Patil.

Speaking to reporters in the city, Eshwarappa said, “If I want to get married, I will be satisfied only after getting married in reality. Isn’t it? It seems the party is acting as if they are still looking for a bride. Let us wait and see. When I was given a clean chit in the case, chief minister (CM) Basavaraj Bommai, former CM Yediyurappa and BJP national secretary B L Santhosh had called and congratulated me. They even assured me of taking me back into the cabinet soon. Even now I am saying the same thing. I was not happy at not being taken into the cabinet. 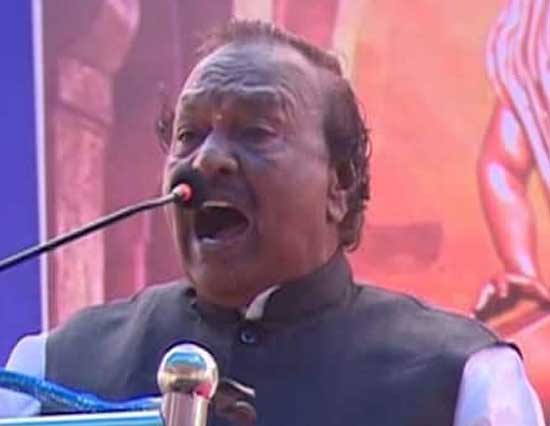 “I am not much bothered about the minister position. Whatever responsibilities the leaders of the party assign, I will handle them efficiently. If I do not get a ministerial position, I will be involved in organizing the party,” he said.

Replying to a query on Siddaramaiah’s accusation of harassing PFI, Eshwarappa said, “Siddaramaiah is hero to Muslims and villain to Hindus. He is a villain to D K Shivakumar as well as for the Congress party, backward communities and Dalits. Only for Muslims he is a hero.”

“Siddaramaiah ruined the future of Congress in Karnataka. He also lost the CM's position. Congress should unite themselves first and then the country. Congress has won only one parliamentary seat from the state. They are not united. So let them get united first.

“Even if Congress people ask their children, they will tell the name of PM Modi. Not a single person takes the name of Rahul Gandhi. Even if Lord Brahma comes, BJP cannot be defeated,” he said.

Title: Kalaburagi: With no ministerial post, Eshwarappa lashes against own party