Bantwal, Oct 4 (IANS): After the ban on the Popular Front of India (PFI) and its affiliates by the union government, pro-PFI slogans surfaced on a road here on Tuesday.

According to police, the writings have surfaced on the road near Pitalabettu village close to Snehagiri. The slogans written in Kannada made scathing remarks on the Rashtriya Swayamsevak Sangh (RSS). 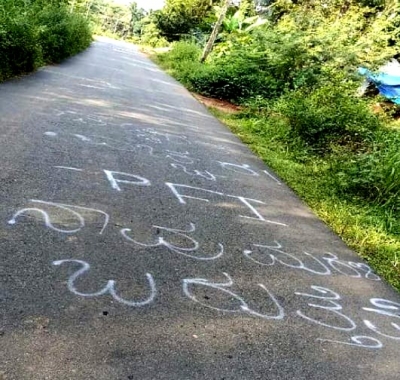 Addressing RSS workers as "chaddis" (slang used to shame RSS workers in Kannada language), the slogan read "beware, we are coming back". The miscreants have ended the writing with the bold letters, PFI.

On noticing the writings, a local youth lodged a complaint with the Punjalkatte police station.

The issue has created a panic and tension in the area and the police are investigating the matter. It is suspected that the development is the handiwork of disgruntled PFI workers.

Since Dakshina Kannada district is regarded as communally sensitive, the authorities are on an alert mode. The PFI offices have been sealed across the state and many leaders taken into custody by the National Investigation Agency (NIA) and Karnataka police.

Meanwhile, Karnataka police have lodged the Unlawful Activities (Prevention) Amendment Act (UAPA) on 15 PFI workers in connection with hatching a conspiracy to incite violence in Bengaluru.

On Monday, the tenth ACMM Court had given its consent to slap the UAPA Act on the PFI workers. The Karnataka police had conducted raids and arrested PFI workers from Dakshina Kannada, Kalaburagi, Shivamogga and Koppal districts on September 22.

The case would be handed over to the NIA Special Court soon, the authorities said.