Udupi: Property dispute, cheated by own children - Elderly woman gets justice at last

Udupi, Oct 4: Dr Ravindranath Shanubhogue of human rights protection foundation of the city informed at a press conference that 86 year old Montin D’Silva, who was cheated by her own children on property, which made her to beg for living, has at last got justice from the senior citizens higher appeal justice board of Mangaluru.

Montin D’Silva is wife of the late Baptist D’Silva, resident of Kallamundkur village. Baptist died in 2006. Through his hard work Baptist made property, gave education to children and got them married also. Due to continuous pestering by the children Montin agreed to make division of 6.25 acres of land and house. 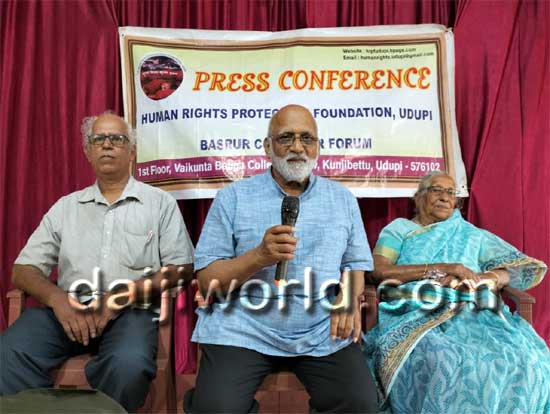 In 2009, all children got the property divided and transferred the same to their individual names. Old house and 2.25 acres of land meant for Montin was mentioned as jointly owned. In the title deed, only names of children were recorded.

In 2014, Montin transferred her part of the property to one of her daughters who took the responsibility of looking after her. However, that daughter cheated Montin and made plans to sell the land.

Montin raised the issue with Pandeshwar police station. In 2018 May, all children agreed to return the property belonging to Montin within six months. However, they did not keep the word. Then Montin approached senior citizens’ grievance committee through human rights foundation of Udupi. Tribunal ordered all children to pay Rs 2000 every month towards the expenses of mother. But even after six months no one gave the promised amount. Montin again approached the board.

Montin’s three children wrote letter to the justice board and said that they are unable to give the monthly maintenance amount to their mother.

As the last step, president of appeal justice board deputy commissioner Dr K V Rajendra declared null and void the division deed given by Montin in 2009 and the right abolition letter of 2014 and transferred the complete rights of property to Montin.

Now Montin has got the ownership of all the 6.25 acres of land as well as the old house made by her husband. Only the tahsildar has to give the title deed.

Dr Shanubhogue said that even if the children appeal to high court or Supreme Court against the verdict, the foundation will support Montin D’Silva.

Speaking to Daijiworld, one of the daughters Jacintha, in a clarification said, “In 2009, we all amicably divided the entire property of our dad. Our mom got equal share then and I was looking after her up to 2019. In 2019, my elder brother came from Mumbai and expelled us from house with the consent of our eldest sister. As per the orders of the AC and DC, I am paying Rs 2,000 per month to my mom from years now.

“We are surprised by the statement of Ravindranath and his team as he has not contacted any daughters or anybody in the vicinity who knows about this fact. They are not helping in giving proper justice. We are ready to prove this with all the necessary documents available with us. This news is created to defame us,” she said.