Varanasi, Sep 7 (IANS): To check the increasing crimes against women in the country, Rachna Rajendra Chaurasia who is an expert in martial art Taekwondo, along with a young scientist Shyam Chaurasia, has prepared a women-safety 'hand grenade' in Varanasi which is Prime Minister Narendra Modi's parliamentary constituency.

It helps to promote women's safety in an emergency situation. Information will be sent to emergency numbers as soon as the device is activated. 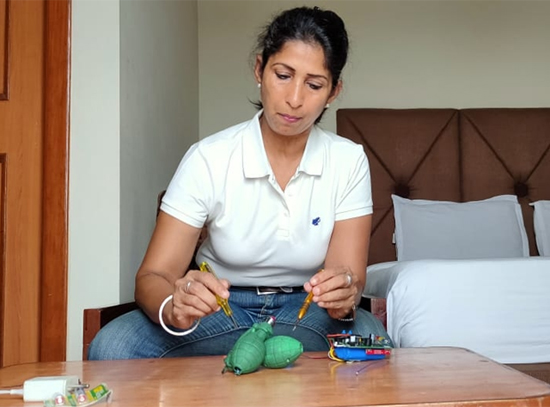 Rachna told IANS that the women safety grenade was very useful for the protection of women.

"The grenade has a SIM card which can secure five to seven numbers. It will contain emergency numbers in addition to the contact numbers of the family members. It has an on-off trigger which can be pressed and thrown. Upon doing so these numbers will trace the location by which they will be able to protect the woman by reaching the location. It is built on complete wireless technology. Due to its small size, it can be kept in a purse or in the pocket. Distance sensor has been used in this and if there are incidents like snatching of purse or mobile of women, then it will start working in active mode. This will work even if the distance breaks," Rachna said.

She said that later, the sound of firing will be heard by pressing the trigger.

"The loud sound can be heard up to a kilometre away. The firing sound catches everyone's attention and people can easily reach the woman or young girl in distress. Using this unique grenade, the location of the incident reaches the number 112 of the police which will be live-streamed by them as well as to the registered members of the family," Rachna added.

Shyam Chaurasia, in-charge of the research and development cell at Ashoka Institute, said it has been designed as an experiment to prevent incidents like molestation and rape.

Shyam said, "This grenade costs a meagre Rs 650 and weighs nearly 50 gram. It works for nearly a week on an hour-long charging. It is a complete 'Make in India' product. No foreign material has been used to make it. A letter has been written to Prime Minister Narendra Modi regarding the same."

Dr Manish Arora, Coordinator of the BHU innovation centre, said, "This is a good innovation for women safety. Right now its prototype is being made. It has an RF and sensor-based technology. It will work at the command centre and help in helpline numbers. It is a commendable effort and needs to be introduced to the industry. Its patent is mandatory."