Mangaluru, Nov 2: The National Unity Day, Diwali and 63rd Kannada Rajotsava were celebrated with vigour and grandeur in Mount Carmel Central School. The day highlighted the love and pride for the State and its language.

The students of Class VII hosted the triple celebrations - National Unity Day, Diwali and Kannada Rajyothsava for the seniors. The programme started with a prayer service highlighting the importance of unity in our day-to-day life. The chief guest of the day, Bhaskar Rai Kukkuvali, writer and orator, was warmly welcomed by the students through words and dance. 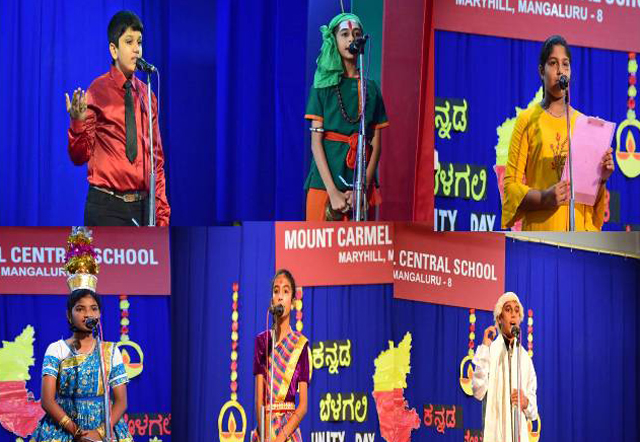 The significance of the day was brought home to the students in a lively and interesting manner through PPT. This set the tone for a mesmerising cultural dance which highlighted all the dance forms of Karnataka ending with the most outstanding and unique art form of Dakshina Kannada District, the Yakshagana, an enthralling flurry of twirls and earth-shaking moves, sending shivers of excitement throughout the audience and winning thunderous applause.

A touching skit on celebrating ‘Diwali with a difference’ followed, which depicted the value of helping the needy and the need for compassion than just enjoying by bursting crackers.

The chief guest appreciated the students for conducting the programme in Kannada and applauded them for speaking Kannada very fluently and correctly, though studying in a CBSE school. Through his message he inspired and encouraged the young audience to love the rich culture of Karnataka and State language Kannada. Speaking on Diwali, he said that we need to understand the spirit of Diwali and strive to be messengers of light and truth. The winners of the Sports Day were felicitated by him.

Principal Sr Melissa in her message highlighted the importance of National Unity Day which was followed by the head girl Bhoomika leading the students in taking an oath for the day. The vote of thanks was rendered by Venessa and Aadhiya Rai and the programme was compeered by Ronan, Ashel, Vashista and Prathyusha, all of Class VII.

The programme of juniors was hosted by classes II D and E and the chief guest was Rajshekar Reddy, senior labour inspector, department of Labour, government of Karnataka. The programme began by invoking God’s blessing through a prayer dance. Sanchay and Nanda Kishore welcomed the gathering with warm words.

The students put up a skit depicting how the Kannada language-speaking regions of South India were merged to form the State of Karnataka. It also depicted that even with different cultures prevailing around the State, we still have unity in diversity. The students conducted the entire program in Kannada. The culture of the state was shown through Kolata, Kamsale, Bharathanatyam and Suggi kunitha. These dances added to the festive mood and the originality of Kannada culture which was worth appreciative. Then the children brought out the significance of Diwali by sharing the story which depicted the victory of good over evil.

The chief guest Rajshekar in his message urged the students, to inculcate love for Kannada language and culture. He briefed about the significance of colours on the Karnataka flag and need to follow the strength associated with it as Kannadigas. The prize winners of various competitions held were felicitated.

Niharika rendered the vote of thanks on behalf of class II D and E. The programme ended paying respect to our State by singing the Nada geethe.