Mangaluru, Sep 27: “There is need occasionally to leave the noise and the tumult of the world and step within the walls of a sacred house of God, there to feel His Spirit in an environment of holiness and peace”. - Gordon B Hinckley (1910-2009), American religious leader and author.

Noise and tumult is the hallmark of religious places when they celebrate special occasions as, for instance, Mangaladevi Temple is set mark its 2019 Navaratri Mahotsava from September 29 to October 9 with a variety of programmes for some of which over a lakh of devotees throng the temple complex. 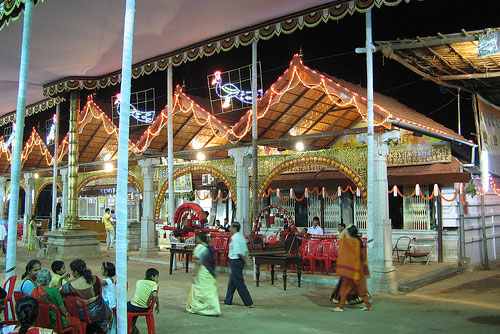 Mangaluru, also once called Mangalapura, and still so called by Malayalis, is said to have derived its name from Mangaldevi, whose temple is situated at Bolar. Temples are magnets to people. It is notable that Mangaladevi Temple is the most well connected temple in this region, with several city service bus-routes touching its front gate almost non-stop. The railway terminus is close to the temple. It attracts large concourse of devotees for its annual festival and the nine-day Dassera festival which attracts over one lac devotees. Fridays is the most special day of the week at the temple, attracting about 5,000 devotees, followed by Tuesdays when about 1,000 people flock to it.

For devotees temple visits are habitual rituals and temples for them are spiritual balms. Most of them have no time or inclination to learn about the origin and growth of their holy brands. Such information, in some cases, is available in cheaply produced sthalapuranas available at site. But, many of them dish out long and convoluted stories.

It is against this background that in the first decade of 21st century I visited many temples of ,, masjids and churches and published articles on them in a weekly column of then vibrant English daily, Vijaya Times (now defunct) under the column head ‘Surviving Centurions’, more than hundred years old at the time of writing. Many of the Hindu temples have been cited in ancient puranas as is the subject of this article.

Mangaladevi Temple’s origin and growth is steeped in history, mythology, legends and beliefs. Once the great seven sages (Saptha Rishis) went to Vaikunta to meet Lord Vishnu. The doorkeepers, Jaya and Vijaya, refused them entry, thus inviting the wrath of the Rishis who cursed them to be born on earth. They took birth on earth as Hiranayaksha and Hiranayakshapu. They became very powerful and began persecution of Vishnu’s devotees. Vishnu, incarnating as Varaha and Narasimha, killed the two and restored happiness to his devotees.

Subsequently, Narada warned Indra about the lurking danger from Vikashini, daughter of Hiranayakshapu and queen of Shonithapura. In addition to harassing virtuous people, she urged her army to attack Indralok. It defeated Indra and occupied his throne. But the king of Yakshas eventually vanquished the earthly invaders. Shattered by this, Vikashini started penance to propitiate Brahma so that he would help her to beget a son who would be powerful enough to avenge the insult suffered by her because of Vishnu. Her penance and devotion, even to the point of offering to sacrifice her body in fire, prompted Brahma to promise her a son from Lord Shiva.

Narada saw danger in this development and he, along with Brahma, went to Kailash, to meet Shiva. After briefing Shiva about Vikashini, they went to Vaikunta to meet Vishnu. They told Vishnu about the danger from Vikashini and sought his help. Vishnu assured them that at an opportune time a solution would be found.

Dreaming about her rosy future, Vikashini, disguising herself as Parvathi, started meditating on Shiva in front of a Shivalinga. This created disturbing vibrations in Shiva. He wandered about and reached sensuous surroundings where he desired the company of his consort. He was led to a place where Vikashini was awaiting him in the guise of Parvathi. She obliged him by satiating his carnal desires. Thus, the seeds were planted. As she returned to her kingdom, a lurking fear of Devatas harming her foetus became obsessive. It was finally decided to seek the help of Bhoodevi and bury the foetus in the earth. In due time, a fully grown demon was born. Vikashini named him Andasura. She fed him well and told him about his pedigree and his mission of taking revenge against Vishnu and Devatas.

Andasura attacked Devaloka, drove away the Devatas and went in search of Vishnu. Meanwhile, in Kailash, the Devine Trinity discussed ways of saving the world from Andasura. They appealed to Mother Goddess for help. Duly equipped and strengthened, she set out to annihilate Andasura who asked Narada about the whereabouts of Vishnu and, when told of a certain spot where he could be found, sent two of his men to check out. They came face to face with Mother Goddess. Seeing her beauty and charm, they made love overtures to her – only to be destroyed by her. On hearing this, Andasura himself went to the spot and tried to seduce Mother Goddess with base motives. She turned on him with ferocity and strength. Unable to face the situation he bolted towards the sea for cover. The Mother, taking the form of Raktheshwari, also jumped into the sea and killed him with the trident.

Then the very involved story continues to the point of creation of Parashurama Shristi by reclaiming the land from the ocean with the throw of an axe. Mother Goddess desired that a shrine for her be constructed in the shape of a linga along with a Dharapatra. This is the place where the present Mangaladevi shrine stands. The Sthalapurana of Mangaladevi reveals its development in Tretayuga.

The task of building the temple fell on Bangaraja, son of Veerababu, king of Tulu Nadu. The Goddess Mangaladevi appeared to him in a dream and revealed to him that at a spot where the Netravati and Phalguni (Gurpur) rivers converge, there was a mound under which lay the remains of a shrine. She bade him to recover from the spot the Shivashakti Linga and Dharapatra and install them in a newly built shrine. He built the temple as desired which was later renovated by Kundaverma. He was the most famous king of Alupa dynasty of Tulu Nadu in the 10th century, with Mangaluru as its capital.

Some of my writings on holy places form part of a book titled ‘DK Darshan - GPS-bases Handbook for Dakshina Kannada’, commissioned by Tourist Department, Karnataka and awaiting publishing.