Udupi, Apr 4: Uttama Prajakeeya Party (UPP) founder, actor Upendra said that he will visit all the 28 Lok sabha constituencies, introduce the candidates through media and make his ideals reach people. “The names of 14 candidates are announced in first phase and those of remaining 14 candidates will be made known after April 7,” he said.

Speaking in Patrika Bhavan in Udupi, he said that he trusts the media and technology. He said, “Our party is neither unique nor a unique attempt. It appears to us that truth is unique in the politics of falsehood and fiction. Instead of politics of making a voter king for a day, democracy of giving value to the opinion of voters during all the five years needs to be implemented in the country. It is our party aspiration and we will reach our goal. 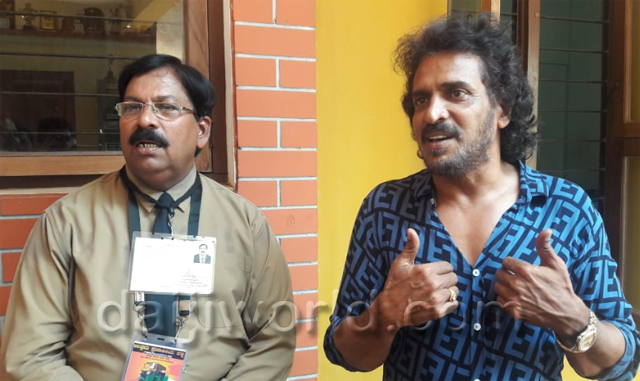 “Every person who pays taxes is a social worker. We should change our thinking in this direction. Complete transparency is possible if modern technology is used in the government. The manifestos of political parties should be registered in the court.

“UPP party does not complain or criticize anybody. I will make our ideals reach youth and will try to pull them. We would like people to bring about change for the progress of the country.

“Health is a basic need in the state. There are several problems in creation of jobs, agriculture and other sectors. Knowledge, money and hard work are required for their progress. We will try to gather them for change in the country,” he said.

Udupi Chikkamagaluru constituency UPP party candidate Suresh Kunder said that they are not using meetings and mikes for campaigns. “We are using social media and pamphlets for campaigns. Instead of representatives of money, people representatives should go to parliament. People should wake up and vote for them and not for us. We are employees,” he said.

“We have founded UPP realizing the need for strong regional party. People should decide which government should be formed at the centre. We only hand over the keys held by the king to the citizens.

Politics is getting commercialised now. Religion, money and muscle power have only become important in it. Falsehood is being said like truth. I have trusted the youth. Let the revolution begin from us,” he said.