Mangaluru, Aug 27: In Goa, social media is abuzz as one of Bollywood’s biggest stars Jackie Shroff, is currently shooting for a Konkani movie called ‘Kantaar’ and while doing so, he has been interacting with a large number of Goans.

After his previous stint with a Konkani film – ‘Soul Curry’, which won Goa state awards including an individual award for Jackie, the actor feels that since he is working with the same team and director, Nilesh Malkar, Konkankars would love to see this movie just like before.

“I take things as it comes, “says Jackie, while answering to a query on what made him take up his second project in Konkani. “I wanted to do another film. So with this project, my dream has come true. And it is my team; the director is the same,” he adds.

Jackie says he is looking forward to working with actress Ester Noronha, and points out that she is a lovely singer and hopes he gets to sing as well.

Speaking about the film, Ester Noronha says, “This is a Konkani film and it is a musical film on the philosophy of life hence titled ‘Kantaar’ – a song of life. And it is at the same time from a Goan point of view, as the Goan sees it as opposed to the rest of the world. It is about redefining Goan culture, representing the Goan way of life and also cherishing the beauty of the villages of Goa, the people of Goa, the language of Goa and everything that is part of the Goan life.” 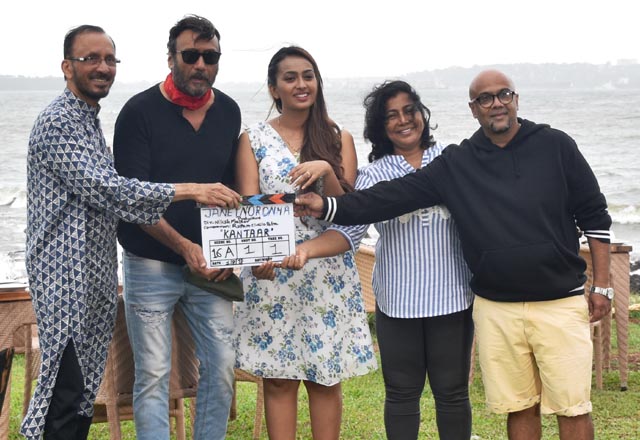 Ester adds that Konkani audience always appreciate her work, whether it is her latest trending cover of ‘Despacito’ in Konkani or her three songs in ‘Goem, Goenkar, Goenkarponn’ or the one song in ‘Nachom-ia Kumpasar’, people have always loved her work. “For me it is just one task but with the love of people it has multiplied. With the support of people, I have become who I am today and this film is more of giving back to the people.”

Ester further points out that a major highlight of the film is Lorna, the nightingale of Goa, is doing playback singing in this film for the first time. “Lorna is the queen of Jazz and her being part of the film is so meaningful. She will also be starring the song,” adds Ester. The film will also have a jazz influence to it.

She further adds that the movie is about showing the real flavours of Goa and that is why they had chosen the interiors of Goa and various locations that most films based in Goa have not explored.

Noel Sean, who was seen alongside Ester in the Konkani cover of ‘Despacito’ is one of the lead actors in the film. Excited, he says: “I am very excited for my second project with Ester. Hope the Konkani audience loves the film.”

Entertainment Society of Goa’s Vice Chairman Rajendra Talak, a noted director himself, has also extended his support to the film.

Mumbai-based director, Nilesh Malkar knew he would return after his first film ‘Soul Curry’ bagged several state awards in Goa. “The response to the first movie inspired me to create my second film and with my last experience. I am quite comfortable making my second film here. ‘Kantaar’ is a musical film; the music is different and I hope the audience appreciates the movie and the songs in the same way they did last time,” adds Nilesh.

“This is all about putting all the things that are important for Goans and Konkani speaking people and whatever we really treasure is what we are going to show. That’s what we felt when we first saw the script and it was a perfect connection to Goa,” concludes Ester.

While the shooting in Goa has completed, the date for the film’s release will be announced later.