May 19: Resigning barely two days after taking oath, former chief minister B S Yeddyurappa ranks among the top three chief ministers of the country, to leave their post in such short duration. The short stint of Yeddyurappa comes only next to Congress leaders Harish Rawat and Jagdambika Pal.

Winning as the largest party at the 2018 assembly polls with 104 seats in a dwindling competition, the BJP fell short of 7 seats to form a majority government. Not willing to let go the opportunity, Congress quickly proposed the JD(S) for an unconditional alliance to form the government that guaranteed H D Kumaraswamy's elevation as a chief minister of the alliance party. The proposal was accepted by the JD(S) leader Kumaraswamy. 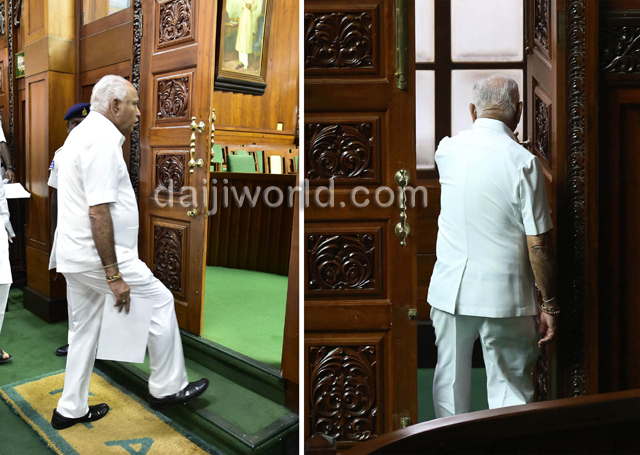 The alliance-led by JD(S) state unit chief H D Kumaraswamy and KPCC president G Parameshwara even submitted the list of 117 elected legislators to Karnataka governor Vajubhai Vala on Wednesday, who assured the parties to take decision in consultation with legal experts and in tandem with the Constitution. However, by late evening, Karnataka governor Vajubhai Vala invited B S Yeddyurappa to form the government and gave him 15-days time to prove majority on the floor of the house, the decision which was challenged by the Congress-JDS alliance leader at the Supreme Court at the intervening night of May 16 and 17.

The Apex court while not granting any 'stay' on the swearing in ceremony, directed B S Yeddyurappa to prove his majority by May 19 evening at 4 pm at the floor of the house. Yeddyurappa was sworn as the 23rd chief minister of Karnataka on Thursday morning in the midst of media speculation of several outcomes and high-drama during floor-testing and the Congress-JD(S) allegation that BJP was trying to poach on their MLAs. Barely minutes past 4 pm into his speech, teary-eyed Yeddyurappa announced that he quit his 2-day chief ministership.

Post the announcement the BJP leaders followed Yeddyurappa to the governor’s office, where he submitted his resignation.

But, Yeddyurappa is not the only CM with such a short tenure:

In February 1998, a major political difference within Kalyan Singh government in Uttar Pradesh assembly was followed by a disrupted and violent assembly session. Then governor Romesh Bhandari who has called in for President's rule, invited Jagdambika Pal from Loktantrik Congress with barely 21 legislators in the 425 lower house to swear in as chief minister. However with the day-break, the High Court which was appraised of the CM's appointment immediately dismissed the Pal government and restored Kalyan Singh.

In 2016, embattling the rebellion by nine MLAs, Uttarakhand chief minister Harish Rawat government was removed and President’s rule was imposed by Governor KK Paul, this despite Harish Rawat parading 33 MLA's on the floor of the house. Challenging the order, Harish Rawat approached the division bench at Uttarakhand High Court to resurrect his government. Setting aside the President-Rule, the UHK restored Rawat's government. But barely a day to governance, during which Rawat announced series of populist schemes, Apex Court intervened and re-imposed President’s Rule, thereby effectively ending the CM's tenure within a day.