Mangaluru, Jul 17: Two persons, who were accused of running an illegal slaughterhouse at Addur near Bajpe were arrested on Sunday, July 16.

The arrested accused were Mustafa (27) and Abdul Majeed (23) from Addur. They were arrested by a special police team led by Bajpe police inspector, T D Nagaraj, during a raid on a house at Addur on Sunday morning. Mustafa and Majeed are siblings and they already face six cases in Bajpe polie station, one in Surakal and station and another in Kavoor station, it is learnt. 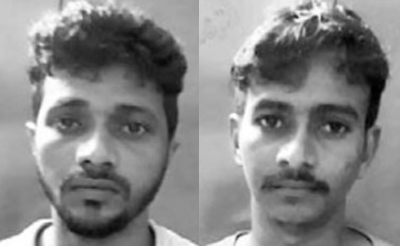 On June 16, Bajpe police led by inspector, T D Nagaraj, had raided a spot at Addur, and seized a Tempo Traveller vehicle, a Duster car, a Ritz car and 16 cattle. Relating to this incident, the police were on the lookout for these two persons. As both had gone missing since the above incident, the police had not been able to arrest them.

Police say that the brothers used to buy cattle which were stolen. Investigation is in progress now.