Bhatkal, Apr 12: "I was charged with fomenting terrorist activities and jailed for over eight years. During my stay inside jail, I underwent torture. Now I have been declared to be innocent. I have full faith in the judicial system and the legal processes in the country. I am also proud to be an Indian," said Shabbir Gangavali also known as Shabbir Bhatkal, who was recently released after having been arrested long back and kept in jail for his alleged links with terrorist activities.

Shabbir addressed a press conference at his home in Mugdam Colony here on Tuesday April 11. "I happen to be a Maulvi. I have nothing to do with Indian Mujahideen and terrorist activities. I had been arrested and jailed relating to a false case of counterfeit currency found in Pune. I have appealed against the verdict in this case in Mumbai high court. However, before the high court came out with its judgement, the term of my imprisonment was completed. I have faith that in this case too my name will be cleared," he added. 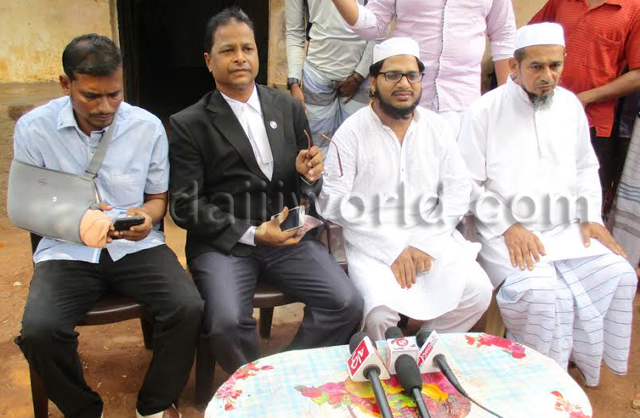 Shabbir said that he has already been exonerated in the case relating to an Arabic religious article supporting Jihad. "Mangaluru police had, in the meantime, taken me into their custody on the allegation of organizing terrorist activities at Ullal. My name was also linked to the blast at Chinnaswamy Stadium at Bengaluru and I was incarcerated. Now I have been cleared of all these cases. During the period I was in confinement, I faced acute kinds of torture. They used to inflict misery on me by targetting even my private parts and beard.

"Although I repeatedly explained that I did not know about Riyaz Bhatkal and Iqbal, they repeated questioned me about them and some others. I will try to forget all these things. It would be futile to spend time brooding over what happened in the past. I have my future life ahead of me. I will spend my time doing noble tasks and serving the people," he explained.