The incident came to fore after a journalist shared a video on social media in which he was seen picking up the Tricolour lying on ground at a garden inside the party office's premises.

The act of Sandeep Mishra, the journalist, was appreciated by people as well as politicians who praised him for showing his respect for the Tricolour, however, it did not go down well with some BJP office bearers in Bhopal. 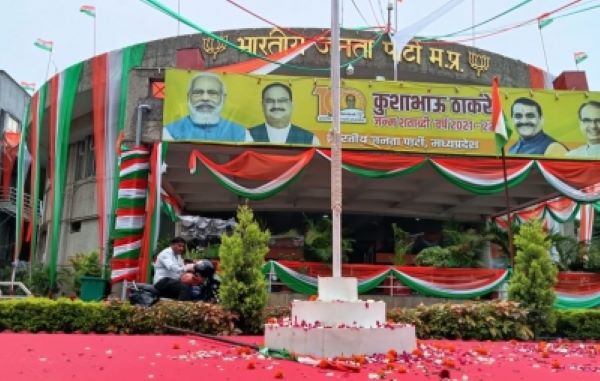 Mishra, who is associated with a Bhopal based new channel and covers political developments in the state, reached the party's headquarters on Tuesday. On entering, he noticed the national flag lying on ground at the garden located infront of the main gate, where Chief Minister Shivraj Singh Chouhan had unfurled Tricolour on Independence Day.

He noticed that one Tricolor was waving on flagpole, while another one was lying on the ground, Mishra told IANS. "As I reched at the gate, I noticed security guards and some party workers were present around the garden, but perhaps no one could have noticed it. I went to the garden and picked up Tiranga. In the meantime, I asked my cameraman to record it."

Mishra uploaded that video on his personal social media accounts.

The opposition Congress found it as an opportunity to attack the BJP. Veteran Congress leader and Rajya Sabha MP Digvijaya Singh re-tweeted the video and thanked Mishra for his conduct.

"The national flag was lying on the ground in the MP BJP office and the BJP workers did not even bother to lift it. I am grateful to the journalist Sandeep Mishra who bravely took up the Tricolour while reporting from inside the BJP office...," Digvijaya Singh said in a tweet.

Following which, the Congress cadres started retweeting the video, mentioning that the BJP carried 'Har Ghar Tiranga' campaign, "but the national flag was disrespected at their party office".

Some BJP office bearers, who were responsible to look after the daily affairs at the party office and failed to notice the national flag lying on ground for over 24 hours, accused the journalist of conspiring to defame the party.

"Some BJP office bearers threatened me that I would not be allowed to enter in the office now. They did not only threatened me, but are also putting up pressure on my office to sack me the job," Mishra said.