Mangaluru, Aug 14: A verbal duel that ensued between the driver of a private city bus and traffic police over the matter of fine, resulted in a protest and the buses that ply between Mangaluru and Talapady stopped functioning for some time. This incident occurred on Saturday, August 13.
The friction started between the driver of the bus who was overtaking a truck near the check post at Talapady at high speed and the Traffic ASI who captured the photo of the act.

According to the complaint filed by traffic police, Ullal police took Abhiraj, driver of the bus into custody and all the buses towards Talapady stopped commuting. Only after the driver was released, the buses started running again. 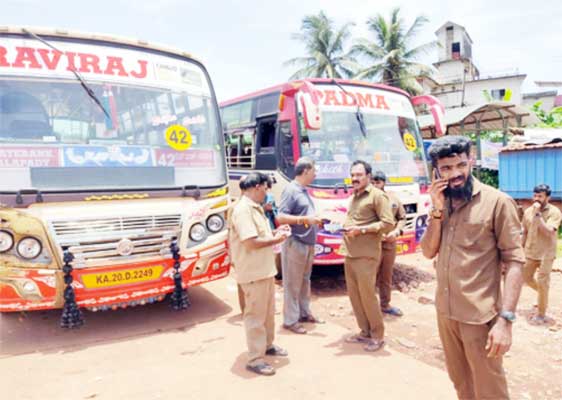 Traffic ASI Albert Lasrado took the photo of the bus, stopped it and asked for documents. The driver said that the documents were in the office and also argued that he did not overspeed. Other bus drivers and conductors also gathered and a verbal duel ensued. Lasrado informed the matter to the Ullal police and they took the driver into custody.

After the meeting that took place in the police station between the officials and Jayasheela Adyanthaya, president of the bus owners’ association, the driver was released.

The driver and conductor also appealed to president Jayasheela to take action against ASI Lasrado. Traffic police said that the matter was resolved through compromise and no fine was slapped on the driver.