Bengaluru, Aug 5 (IANS): The Special Inquiry Wing of the Central Crime Branch (CCB) of the Karnataka police busted a racket by a syndicate of manufacturing fake stamp papers and arrested 11 persons in Bengaluru on Friday.

The gang was operating under the nose of the revenue department office in Kandaya Bhavan in the heart of Bengaluru city. The accused were printing and selling duplicate government stamp papers. The Karnataka government had banned the open sale of stamp papers following the multi-crore Telgi fake stamp paper case in the 1990s. 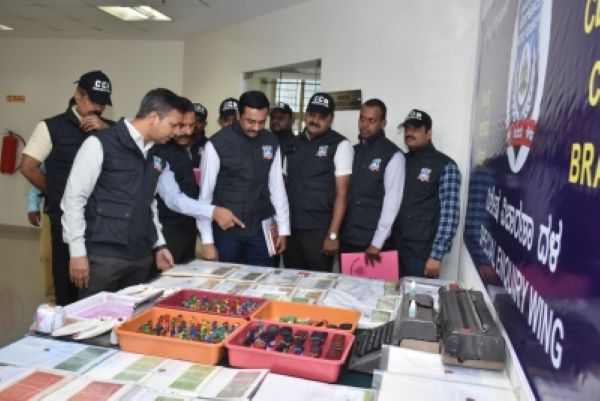 The CCB sleuths seized fake stamp papers of various denominations worth Rs 5.11 lakh which were being sold to brokers and middlemen who further transacted with real estate businessmen.

The police said that the CCB officials received information that a few typing stalls at Kandaya Bhavan were making government prohibited stamp papers and they even mentioned back dated dates and years of their choices to facilitate bogus documentation and sold them to people who sought them.

The CCB's Special Inquiry officials carried out a raid and detained 11 men who were involved in the racket. 2,664 fake stamp papers of various denominations were seized from them. The CCB also seized a computer, printer, mobile phones, hard disks and rubber stamps of various government offices including that of the revenue department along with 119 fake seals of various other government departments. The team also seized fake GPA documentation of 1990, and other GPA documentation of 1995, 2002 and 2009.

The accused also prepared old franking papers so that they become a part of pre-dated valid documentation that used to exist in the past, but was banned for many years after the Telgi scam surfaced.

The CCB sleuths have seized 4 fake property documents, and they are probing who sold these stamp papers to whom and which fake documents have been created using the fake stamp papers. The 11 accused are being interrogated to unearth the full details.