Siddaramaiah B'day bash: "we are united' message by Congress, pledges to defeat BJP

Davanagere, Aug 3 (IANS): The Congress high command has successfully managed to send a message of unity to the people of Karnataka through the mega celebration of Opposition leader Siddaramaiah's 75th birthday on Wednesday.

Siddaramaiah and party state president D K Shivakumar, vying to project themselves as the party's CM face so far, declared on the stage that they are united against the BJP and will work towards ensuring a Congress victory in the upcoming assembly elections. 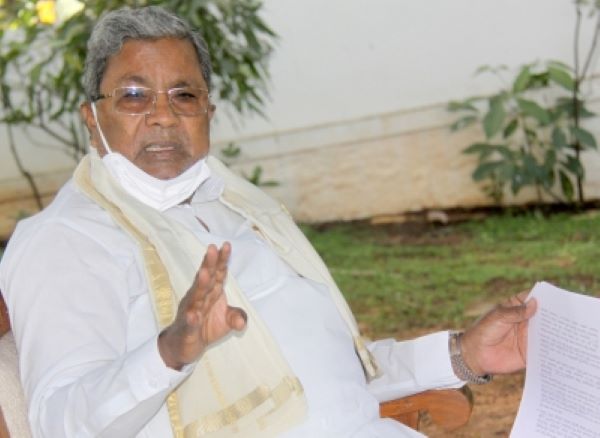 Shivakumar took the lead to present Siddaramaiah a special silk shawl and also gave him a hug. In his speech Shivakumar maintained that the elections would be fought under the leadership of Siddaramaiah.

Siddaramaiah in his speech announced that "I and Shivakumar are united to defeat the BJP. It is the handiwork of opponents and a few media houses to create disharmony between us and send false messages to the people."

Former Congress president Rahul Gandhi, who came to Karnataka to attend the birthday bash of Siddaramaiah, praised both the leaders and expressed his happiness over the gesture of Shivakumar and Siddaramaiah to embrace each other on the stage.

Rahul Gandhi stated that he shares a special relationship with Siddaramaiah and that's why he came to attend the celebrations. "I don't generally go to birthday celebrations," he said. "Of course I like Siddaramaiah Ji. I also share his views, I share his compassion for the poor and the weak. I also appreciate the way Siddaramaiah ran the last government in Karnataka. It gave direction to the people of the state. It had a vision for Karnataka."

Gandhi said that Shivakumar has done tremendous work for the Congress. "The party is united to defeat the RSS and the BJP in Karnataka," he declared.

Sources in the Congress party said that the development would motivate the party workers as it has been clearly mentioned that the Congress would fight the assembly elections under a collective leadership.

Siddaramaiah in his speech went on to challenge Prime Minister Narendra Modi that, "Mr Modi and BJP, you can't finish off the Congress party and people will not allow you to change the Constitution of the country."