Bengaluru, Jul 7 (IANS): Rajya Sabha nominee from Karnataka Veerendra Heggade on Thursday said that his nomination to the Upper House came as a pleasant suprise.

"I did not imagine being nominated to the Rajya Sabha as I did not demand it. But am honoured as this would help me expand the service base from the state to the country," he said. 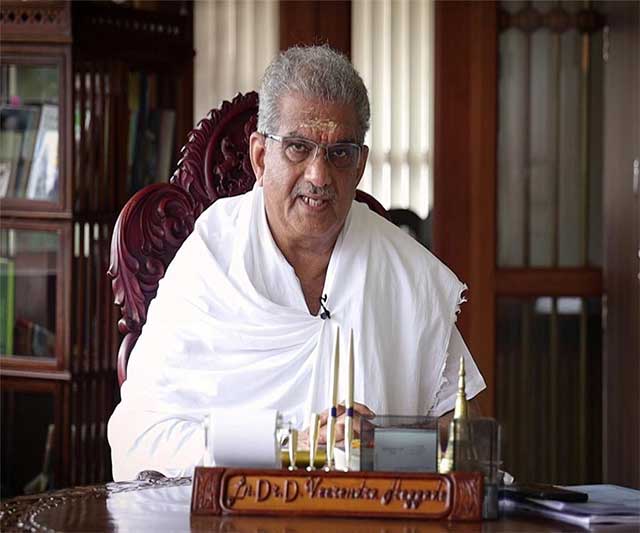 "I was unaware of the development till last night. Since then, congratulatory messages have been pouring in from all sections. Our people are happy," he stated.

He further stated that, "Politics does not interest me. There can be no bigger platform than serving "Manjunatha Swamy" (Hindu God)."

"I feel honoured to be called a parliamentarian rather than a politician as politics is not my forte. I will strive to expand our work. It is happy to see that people showering their love on me."

Reacting to the development, Chief Minister Basavaraj Bommai termed Veerendra Heggade's nomination a matter of "honour and happiness" for the people of the state. "He is not only the Dharmadhikari (administrator) of Dharmasthala (Hindu pilgrimage center in state), his services are known throughout the state," he said.

Veerendra Heggade is an Indian philanthropist and hereditary administrator of Dharmasthala Sri Manjunatha temple, which is revered by the people of Karnataka and across south India.

He administers the temple and its properties, which are held for the benefit of devotees. He has been awarded the highest civilian award Karnataka Ratna award in 2009.

The Indian government conferred Padma Bhushan award on him in 2000 for social work and communal harmony. He received the Rajarshi title from the former President of India, Dr Shankar Dayal Sharma in 1993.

He was awarded Padma Vibhushan by the government of India in 2015 for social work.

Veerendra Heggade is a car collector and has passion for photography as well. He has been conducting free mass marriages every year in Dharmasthala since 1972. He has constructed marriage halls across the state to the benefit of middle and low income groups.

He has successfully introduced a rural development project in the coastal Karnataka region in 600 villages and 6 towns. He established the Rural Development and Self- Employment Training Institute (RUDSETI) to train rural youth for self-employment in 1982. Since then 20 branches of RUDSETI have come up across India. More than 1.5 million youth have been trained under the project.

He runs one of the largest kitchens in the country called Annapoorna kitchen on the premises of Dharmasthala Sri Manjunatha temple. It feeds more than 50,000 persons every day.