Bengaluru, Jul 6: ADGP Amrut Paul arrested in the multi-crore police sub inspectors’ recruitment scam wants to name the prominent ministers and leaders involved the scam but the CID is not recording his evidence, charged KPCC Chief DK Shivakumar on Wednesday.

Speaking to media persons in Vidhana Soudha, Shivakumar said corruption was rampant in the State and Karnataka has been the ‘corruption capital’ and alleged that ministers, IPS officers, politicians are involved the PSI scam. 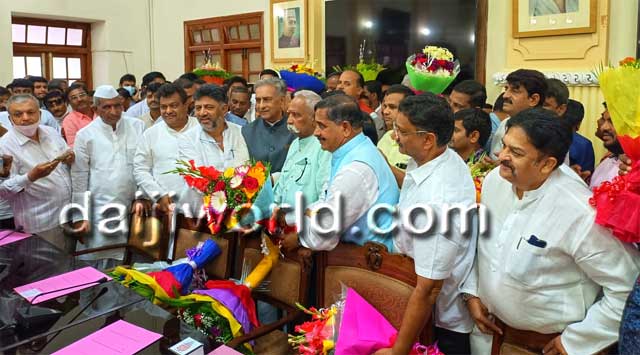 Over 50 persons, including 20 policemen and officers, have been arrested in the PSI scam, the KPCC chief said the arrested ADGP wants to give a full statement but the investigating officers were not recording his evidence.

He demanded that a thorough probe by a sitting High Court judge must be conducted to bring out the truth.

Answering questions on the study tour of Ladakh region, Shivakumar said the same BJP had criticised when the Congress government wanted to send legislators on study tour.

The KPCC Chief said there is nothing wrong in the Siddaramothsava to mark the 75th birthday celebrations of former Chief Minister and Congress opposition leader in the assembly. It is left to the leaders to decide on celebrating their birthday or their supporters. “I will support anybody organising any programme for the benefit of the party,’’ he said.

He said that he has convened a meeting of party leaders to discuss on the proposed yatra to mark the 75th anniversary of Independence on August 15. As many as 75,000 to 1 lakh party workers will take out a yatra. Another 75 kms long yatra is being planned, he added.