Bantwal: Road at Kudtamugeru inundated due to heavy rain

Bantwal, Jul 5: The road at Kudthamugeru in Kolnadu village here was inundated due to incessant heavy rain that has been lashing here. As the level of water in the lake nearby rose, traffic was suspended.

The road was flooded as the water level in the lake flowing beside the road has risen. This caused impediment for traffic.

The level has been rising since morning on Tuesday July 5. It had decreased for a short while but has been rising after it. Villagers are guarding on both sides of the road to prevent untoward incidents. Vittal station police visited the spot and conducted inspection.

Hill caves in at Saradka, Bike rider has miraculous escape

There was a landslide of the hill at Saradka, Kerala-Karnataka border of Kanhangad highway due to heavy rain that has been pounding here for the last few days. The road was blocked because of mud on the road. A bike rider had a miraculous escape when his bike got stuck in the mud. 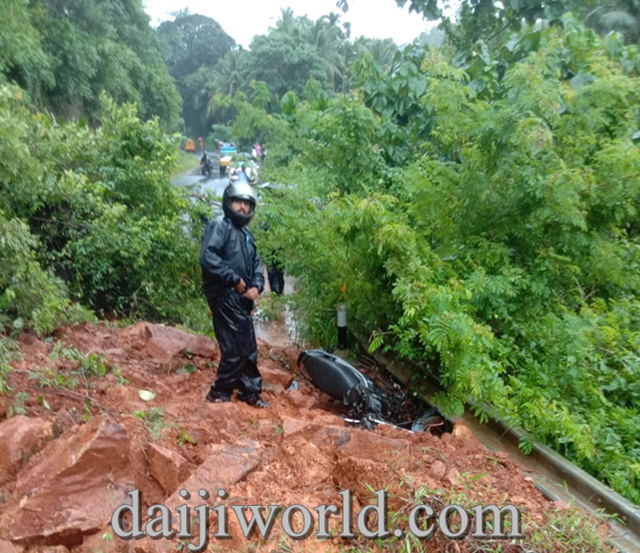 Vittal police station inspector H E Nagaraj led police team visited the spot and conducted inspection. As the hill caved in on the road, the traffic between Kasargod and Vittal is disconnected. The operation of clearing the mud from the spot was in progress till night.

Title: Bantwal: Road at Kudtamugeru inundated due to heavy rain