Mangaluru, Jul 2: City-based Land Trades Builders and Developers have reaffirmed their institutional credentials with a confirmation of their Real Estate Developer Grading of DA2 from CRISIL, premier ratings organization in the country. The confirmation of the grading was conveyed to Land Trades via CRISIL’s certification letter dated June 27.

CRISIL has awarded this rare distinction on Land Trades following stringent quality audit, which evaluated the firm’s performance on several standardized parameters. Land Trades is the only real estate firm of Mangaluru to enjoy this high grading. Land Trades has been enjoying DA2 grading by CRISIL since 2018. As the grading is awarded on periodical basis, CRISIL undertook a fresh audit upon expiry of the validity period and reaffirmed the DA2 grading. 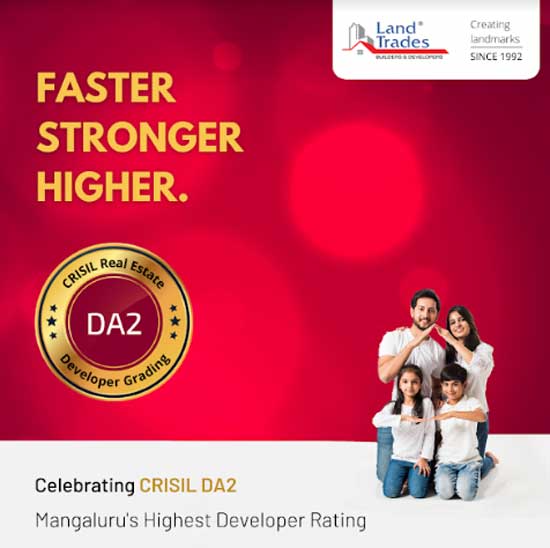 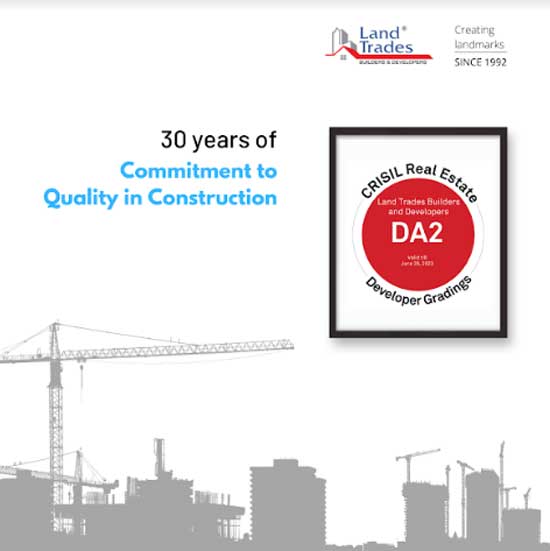 “Reconfirmation of DA2 grading by CRISIL is an important independent third party validation of our continuous effort to improve our credibility and reliability in serving our customers. Over the years, we have constantly and voluntarily applied for certification from CRISIL for all our major residential and commercial projects and set a new benchmark for quality in the real estate sector of Mangalore,” said K Shrinath Hebbar, proprietor of Land Trades Builders and Developers.

The ‘DA2’ grading indicates that the developer’s ability to execute real estate projects as per the specified quality level and within the stipulated time schedule, and to transfer a clean title, is ‘very good.’ The grading also reflects Land Trades’ strong brand image, goodwill and sound marketing and project development strategies.

It recognizes the promoter, Shrinath Hebbar’s deep engagement with realty development business in Mangaluru for over 30 years and the firm’s longstanding presence in the region. The firm has completed 40 projects, aggregating 29 lac sq ft and four ongoing projects cover 4.60 lac sq ft the report adds.

In 2013, Land Trades became the first realtor of Mangaluru to go in for CRISIL quality rating for its individual projects. Its projects Solitaire, Sai Grandeur, Ourania, and Insignia have gained the highest rating of ‘Mangalore 7 Stars’. Maurishka Palace got ‘Mangalore 6 Stars’ post-completion and Atlantis ‘Mangalore 5 Stars’ during the construction stage itself.

Land Trades has an airtight internal quality protocol involving three levels of quality monitoring. The firm uses only top quality branded products for all its projects. All raw materials and end products are subjected to rigorous lab testing and certification at specific stages to ensure full compliance with pre-determined parameters. As a further safeguard, external third party checking and certification is also done.

Founded by Shrinath Hebbar in 1992, Land Trades is a comprehensive solution provider in real estate. Following its foray into apartment construction in 2007, the ISO 9001:2015 certified firm has emerged as the city’s leading property developer with mega projects like Sai Grandeur, Maurishka Palace, Atlantis, Solitaire and Altura to its credit.