Mumbai, Jun 27 (IANS): There was jubilation in the rebel Shiv Sena legislators' camp after the Supreme Court proceedings on Monday while hectic politicking started in the Bharatiya Janata Party and the mood turned sombre in the ruling Maha Vikas Aghadig.

Rebel leader Minister Eknath Shinde tweeted: "This is the victory of Hindu HridaySamrat Balasaheb Thackeray's Hindutva and the ideology of Dharmveer Anand Dighe." 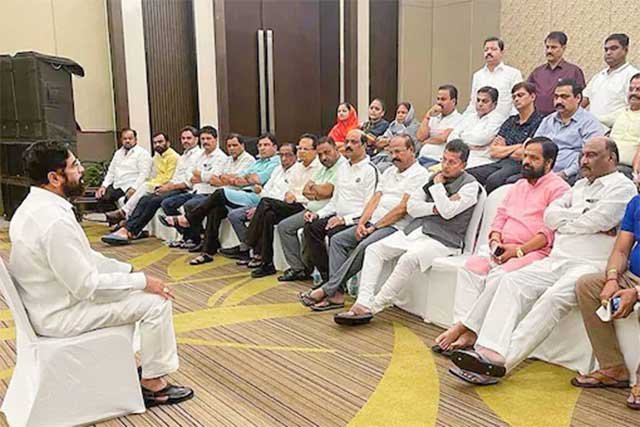 The faction - currently in a Guwahati hotel - erupted into joy and celebrations after the apex court ruling and also expressed gratitude to the Centre for providing security to the rebel MLAs and their families.

Shinde is reported to have initiated the process to finalise and send a letter to the Maharashtra Governor that they have withdrawn support to the MVA government of Shiv Sena-Nationalist Congress Party-Congress.

On the Opposition side, the BJP's core committee meeting got underway with top leaders present to finalise their strategy to form the next government in the state, possibly with the help of the rebel group.

Shinde has claimed the support of 39 Sena MLAs, and 11 independents or other parties, totalling to 48, and the group is likely to extend its sojourn in Assam by a few more days.

Several leaders joining the meeting were seen beaming in anticipation and some flashed the 'V' sign, indicating an upbeat mood.

Hitting out again, MVA Minister Aditya Thackeray alleged that many of the MLAs were misled or abducted to join the rebel group and the party is ready to take them back.

"If the rebels had courage, they would have first resigned and faced the electorate instead of all this," said Thackeray Jr.

Sena chief spokesperson and MP Sanjay Raut said that "this a legal battle and will continue" and said the party will fight it out.