Puttur, Jun 21: Locals urged to close a new bar and restaurant that is opened in Mura on Mura-Kedilasadak road under Kabaka gram panchayat limits. They gheraoed the excise official vehicle, which had arrived to clarify the issue to the spot on Monday June 20.

Social worker Sudarshan led the group of locals. Sudarshan said to the excise inspector, “It is wrong to have given permission to open bar and restaurant in residential area of Mura. Earlier, a hotel by the name Preetham was functioning, now permission is given to run bar and restaurant. We, the locals of this area oppose this.” 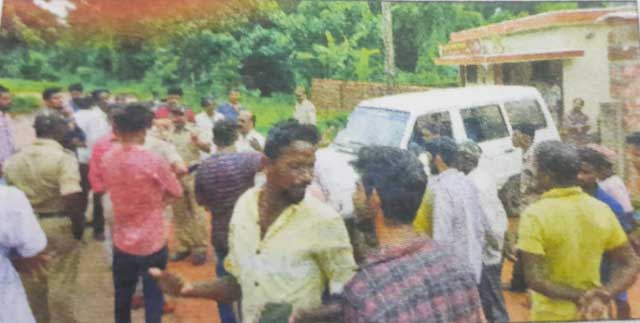 Many locals were supporting Sudarshan. However, some liquor lovers said that they need the bar as there was a bar earlier in Mura town.

Excise inspector Sujatha said, “This bar is opened as per permission from excise DC. We have come for inspection as per orders from higher officials. We will convey your opinion and appeal to them.”

The locals were not convinced at the statement of excise inspector and said that they want the bar to be closed immediately. Puttur police arrived and drove away the protesting locals.