United Nations, Jun 21 (IANS): Rejecting Organisation for Islamic Cooperation's (OIC) criticism as "divisive," India has said that efforts to combat religiophobia will not succeed if the rising hatred against Hinduism, Sikhism and Buddhism is ignored.

"It's time that UN member states condemned hatred against non-Abrahamic religions as well and stop from being selective in combating religiophobias," India's Permanent Representative T. S. Tirumurti told the General Assembly on Monday. 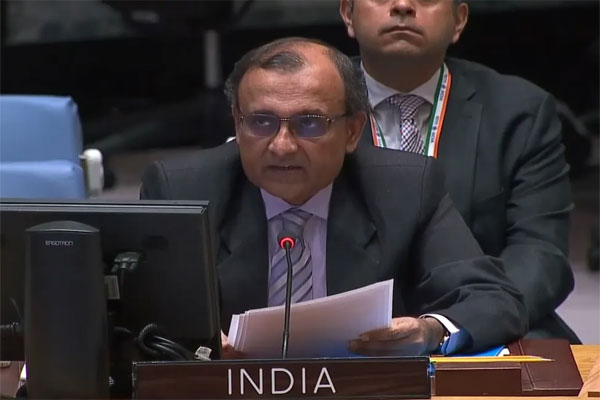 "There cannot be double standards on religiophobias if you truly want to combat hate," he said at the informal high-level meeting commemorating the first International Day for Countering Hate Speech.

India has promoted a culture of tolerance and respect for all religions under its constitution and its legal system deals with violations, he added, reacting to a criticism voiced by Pakistan on behalf of the OIC.

"Aberrations are dealt with within our legal framework and we reject selective outrage from outside, especially when they are motivated and pursuing a divisive agenda just as we heard today's references against India by OIC," he said.

Pakistan was referring to BJP spokesperson Nupur Sharma, who has been suspended by the party's leadership and is facing criminal charges in several cities of hurting religious sentiments.

Tirumurti said, "India has time and again emphasised that combating religiophobia can never succeed if it continues to be exclusionary and remains restricted to one or two religions only, while completely ignoring the rise in hatred and discrimination against non-Abrahamic religions, including Buddhism, Hinduism and Sikhism."

The Abrahamic religions are Judaism, Christianity and Islam, which trace their origins to the Jewish Prophet Abraham.

Tirumurti cited the attack by the Islamic State on a gurdwara in Kabul on Saturday, the very day designated by the General Assembly to combat hate speech.

"We condemn in the strongest terms this cowardly, dastardly attack where lives were tragically lost," he added.

A Sikh worshipper was killed in the attack on Gurdwara Karte Parwan, as was also a member of the ruling Taliban's forces trying to protect it.

It was also targeted with a car bomb that went off nearby.

The international reaction to it has been muted with the only notable condemnation of the attack coming from the UN Mission in Afghanistan.

"We firmly believe that a society based on principles of democracy and pluralism provides an enabling environment for diverse religions and communities to live together," Tirumurti said.

"Today, every one of the world's major religions has a home in India, making it a nation of unparalleled diversity. India has, over centuries, provided refuge to all, whether Zoroastrians or the Jewish community or Tibetan Buddhists or many from our own neighbourhood," he added.

Pakistan's Permanent Representative Munir Akram speaking on behalf of the OIC said that "denigration of Prophet Mohammad by India's ruling party's official" along with republishing cartoons of Mohammad by a French satirical publication and burning copies of the Quran in Sweden were "willful provocations and defamation of Islamic holy personalities and religious symbols".

He called them "gross abuse of the right of freedom of expression" that hurt the sensitivities of Muslims and "reinforce extremist sentiments".

UN General Assembly President Abdulla Shahid said, "Cyberspace and social media together with the proliferation of disinformation and fake news have aggravated the effects of hate speech to unprecedented heights."

"We cannot let the word 'speech' fool us: this trend has grave material consequences on the lives of those it targets and has particularly adverse effects on those most vulnerable," he added.