Karwar, May 24: A unique bridge is now in news. Though the officials built it for the convenience of locals at a cost of Rs 19 crores, the public is not able to use the same as the contractor forgot to build a connecting road and downward slope to approach and get off the bridge.
The bridge was built for the residents of Bogribail village across Aganashini river. Some affluent residents of the village have made a downward slope using branches of trees. But during the monsoon it gets washed away.

Jayant Naik, resident of Bogribail says, “From the past three years we have been facing this issue. We got to the bridge by bike and parked it there below a tree. Then we used a temporary sloping ladder to reach the top of the bridge which is at a height of 30 feet. Then walked till the other end. This bridge is not beneficial for the villagers in any way.” 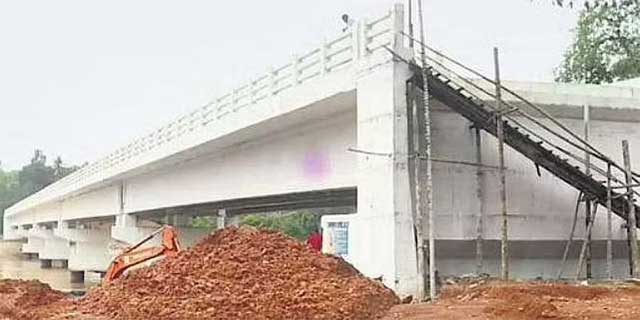 The bridge project started five years ago. The contract was given to Karnataka Road Development Authority. The bridge was supposed to be inaugurated two years ago. The work is complete and it is white washed also. Many villagers have lost their land for building this bridge. Only some have received compensation. But the connection road is still a mirage for them.

Responding to the woes of villagers, Kumta MLA Dinkar Shetty said, “The contractor is responsible for the delay in completing the project. During the reign of Siddaramaiah, though the foundation stone was laid, actual work did not begin. After BJP came to power, the grants were released but land acquisition took a long time. I had taken up this issue in the last legislative assembly session. The minister concerned has assured to release the funds soon. So the project will get completed soon.”

DC Mullai Mahilan said that funds had been released for the completion of the project and the work will get over soon.