Puttur, May 24: Due to the sloppy work reportedly done by the contractor of national highway (NH) four-lane work, two mammoth container carrying trucks fell into roadside ditch and caused huge traffic block for three hours at Karvel near Uppinangady on Monday May 23.

School going children and other vehicle drivers and passengers had inconvenience due to the long traffic block.

The workers engaged in the four lane work of national highway had dug road side area and did not clear the mud. Due to rain, the mud flowed into the drain and the drain got completely covered with mud. When a container truck driver tried giving way to another vehicle his tyre got jammed into the drain covered with mud. A little later, another container truck which was coming from the same side tried to pass through the tilted container, it also got stuck. 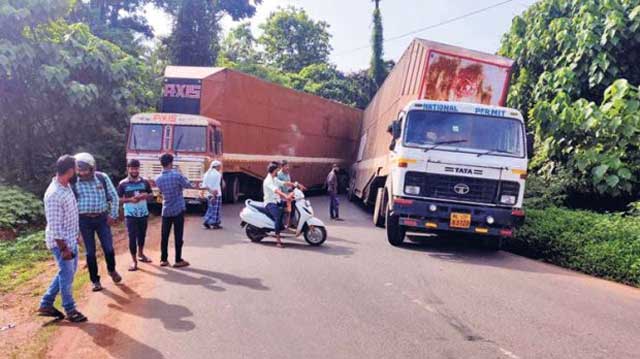 Both containers were moved back to position by the help of crane. Tyres of other vehicles also get jammed in the slime that is created due to the mud left at the place of work. Many incidents have occurred in the past few days, but the contractor is not bothered. On May 23 as containers got stuck, it created chaos.