After 80 months' behind bars, murder-accused Indrani Mukerjea walks out of jail

Mumbai, May 21 (IANS): Nearly 80 months after she was arrested on charges of murdering her daughter Sheena Bora, former high-profile media bigwig Indrani Mukerjea on Friday walked out of jail on bail granted by the Supreme Court.

On stepping out of Byculla Womens Jail, Indrani - appearing relaxed, smart in a white salwar-suit, make-up and her gray locks well-coiffed - got into a waiting dark car along with her lawyer, Sana R. Khan, to be driven home to an unknown location. 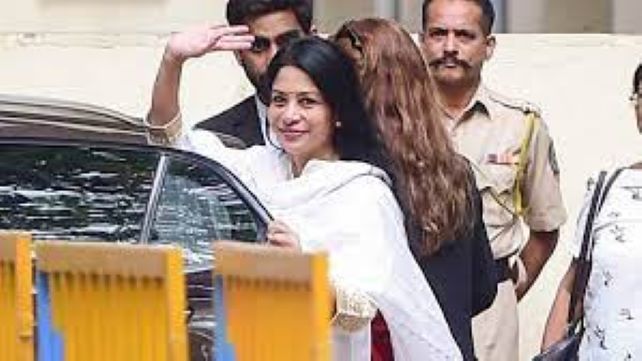 Facing a volley of questions from the battery of media assembled there, she feebly smiled and said: "Khula aasman dekha bahut khushi hui (I saw the open skies and felt very happy", as the car sped off.

Indrani - the prime accused in the murder of her daughter Sheena Bora - added she was feeling better but had not made any future plans after getting enlarged on bail - in her 10th attempt since Sebtember 2016.

The apex court bail order was submitted to the Special CBI Court in Mumbai and the formalities of releasing her got underway after Khan furnished a cash amount of Rs 200,000, and dropped the bail order at the Byculla Womens Jail.

Prior to this, Indrani's third ex-husband Peter Mukerjea - they divorced by mutual consent while in incarceration - nabbed in the same case, was granted bail by Bombay High Court on March 20, 2020.

The erstwhile Mukerjea couple, along with their driver Shyamvar P. Rai and Sanjeev Khanna, the second husband of Indrani, were arrested at different points in 2015 after the unbelievably horrifying Sheena Bora murder case was detected and cracked by Mumbai Police.

Just 24 then, Sheena Bora was in a live-in relationship with Rahul Mukerjea - the younger son of Peter Mukerjea from a previous wedding - but it later emerged, he was the step-brother of the deceased girl.

Incidentally, after Indrani married Peter Mukerjea, she had passed off Sheena as her sibling along with sole brother Mikhail Bora, though both were her children from her first marriage with Siddhartha Das of Shillong.

Indrani was reportedly opposed to Sheena's relationship with Rahul Mukerjea and hatched a conspiracy to eliminate her.

Sheena's part-burnt body was dumped in a suitcase and thrown in the thick jungles of Raigad on April 24, 2012.

Her unidentified, charred, body remnants were recovered on May 23, 2012, but no ADR or FIR was lodged and only a station diary entry was made at the Pen Police Station, Raigad.

The investigations kick-started over two years later, around May 2015, after Mumbai Police got a tip-off from the driver Rai, who was arrested for possession of illegal arms.

After his sustained interrogation, Rai blurted out the gory details of what turned out to be one of the most sensational murder cases of the last decade and hogged the limelight for months as sordid details tumbled out along with Bora's skeletal remains.

At one point, in December 2021, Indrani made a bizarre claim to the CBI that her daughter was actually alive and living in Jammu & Kashmir, but there were few takers.

Meanwhile, Indrani - who had first applied for bail in September 2016 - saw her pleas being rejected as many as nine times by the Special CBI Court, the Bombay High Court, but succeeded in the 10th attempt on Wednesday at the Supreme Court.

Title: After 80 months' behind bars, murder-accused Indrani Mukerjea walks out of jail