Bezos spars with Biden on Twitter over taxing the wealthiest

San Francisco, May 14 (IANS): Amazon founder Jeff Bezos has accused Joe Biden of "misdirection" on Twitter, as the US President tweeted that the wealthy corporations must "pay their fair share".

"You want to bring down inflation? Let's make sure the wealthiest corporations pay their fair share," Biden tweeted late on Friday. 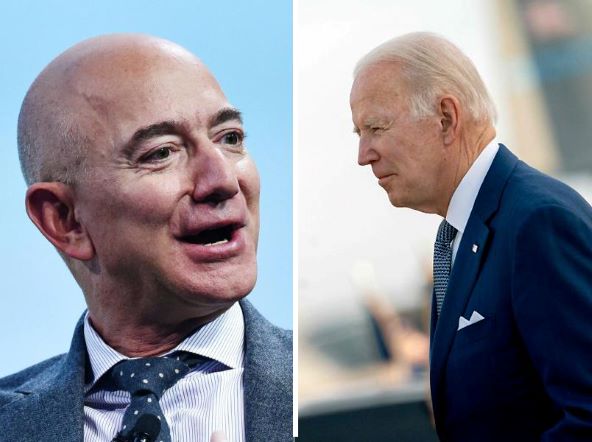 An angry Bezos replied: "The newly created Disinformation Board should review this tweet, or maybe they need to form a new Non Sequitur Board instead," referring to the Department of Homeland Security's Disinformation Governance Board announced in April.

"Raising corp taxes is fine to discuss. Taming inflation is critical to discuss. Mushing them together is just misdirection," Bezos added.

According to ProPublica, Bezos personally paid nothing in federal income taxes in 2007 and 2011.

Inflation in the US has reached its highest levels since the 1980s, after fuel prices soared owing to the Russia-Ukraine war.

Earlier this month, the US Federal Reserve raised its benchmark interest rate by a half percentage point, marking the sharpest rate hike since 2000, as it takes more aggressive steps to rein in the highest inflation in four decades.

"Inflation remains elevated, reflecting supply and demand imbalances related to the pandemic, higher energy prices, and broader price pressures," the Fed noted, adding that the Russia-Ukraine war and related events are creating "additional upward pressure" on inflation and are likely to weigh on economic activity.

"The Committee is highly attentive to inflation risks," the Fed said.

Title: Bezos spars with Biden on Twitter over taxing the wealthiest