The award which is instituted by Sri Narayanananda Saraswathi Trust was presented by priest of Kateelu temple Kamaladevi Prasad Asranna. 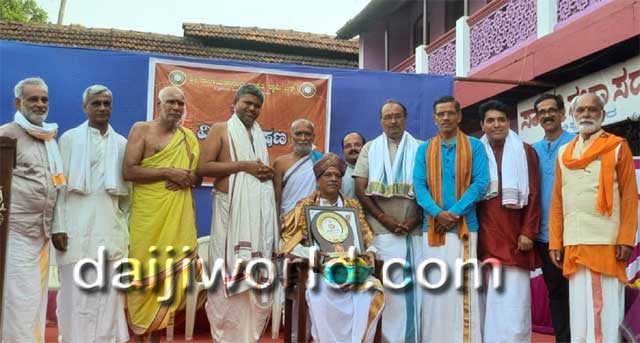 Speaking on the occasion, Asranna said Vipra means someone who is bestowed with power and one who wishes for the best despite being in difficulty is the true essence of brahminhood.

"It is not enough to be born into a brahmin family. He should inculcate a culture of brahminism and karma to become a true brahmin. All members of the brahmin community should unitedly work," Asranna said. He said deshasta brahmins have set an example in the country.

Speaking after accepting the award, Subramanya Bhat Paradkar said it is necessary for the next generation to learn vedas and shastras. He said the priests should first invoke Goddess Saraswathi and take her blessings as Goddess Lakshmi will definitely follow on her own.

"Education should be the priority and humility is a virtue," he said. Paradkar  said this award is an honour to the Deshasta brahmin community.

The function was followed by a Yakshagana performance by the Kadri Yaksha Koota under the direction of Ramachandra Bhat and composition of Jitendra Kundeshwara. Ranjitha and Rukmini gave a bharatanatyam performance.